The mitochondrial enzyme carnitine palmitoyltransferase 1A (CPT1A) is involved in the activation of hepatic stellate cells (HSCs) and liver fibrosis, according to a new study published in the Journal of Hepatology.

A mutation in the CPT1A gene, which encodes the CPT1A enzyme, is responsible for CPT 1 deficiency, a long chain fatty acid oxidation disorder (LCFAOD).

“When they are activated, HSCs convert from inactive, vitamin A-rich cells into myofibroblast-like cells with proliferative, migratory, and fibrogenic properties,” the authors explained.

The multi-institutional study found that CPT1A was upregulated in the HSCs of patients with fibrotic nonalcoholic steatohepatitis, as well as in animal models of fibrosis. CPT1A colocalized with α-smooth muscle actin in fibrotic liver tissue within areas positively correlated with the fibrosis score and the nonalcoholic fatty liver disease activity score.

CPT1A overexpression triggered the activation of HSCs in vitro. Moreover, it increased oxygen consumption rate and the expression of fibrotic markers in transforming growth factor beta-1 (TGFβ1)-treated cells. These effects seem to be primarily mediated through the production of mitochondrial adenosine triphosphate.

“Our results showing that CPT1A is overexpressed in HSCs cell in patients with fibrosis and fibrosis animal models, and that FAO is increased in activated HSCs, are in agreement with the hypothesis that activated HSCs lose their intracellular lipid droplets to provide fatty acids for activation and transdifferentiation,” the authors wrote.

Pharmacological and genetic silencing of CPT1A in HSCs from human cell lines and primary HSCs prevented TGFβ1- and fetal bovine serum-induced HSC activation by reducing mitochondrial activity. In addition, the authors found that CPT1A knockout mice were protected against methionine- and choline-deficient diets, as well as carbon tetrachloride-induced fibrosis. 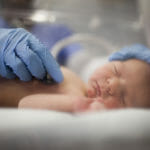