An increased incidence of long chain 3-hydroxyacyl-CoA dehydrogenase deficiency (LCHADD) was found after its addition to the expanded neonatal screening program (ENBS) of Czechia, according to a new study published in the journal Nutrients.

“These findings indicate that some patients may have been missed and died undiagnosed in the pre-ENBS era. Another possible reason might be that ENBS may detect milder forms of the disease, possibly resulting in unnecessary dietary restrictions in patients who may never become symptomatic,” the authors commented.

The idea behind the addition of LCHADD to the ENBS was to provide early detection and early initiation of dietary interventions to help prevent early mortality and developmental disability, according to the authors. However, the study was not able to detect any significant improvement in mortality (P =.10) or overall clinical outcomes in LCHADD patients.

Significantly longer intervals between birth and first acute encephalopathy were found in the study. Positive trends, although nonsignificant according to results, were observed in neuropathy (P =.07) and cardiomyopathy (P =.09).

The study also investigated the effects of adding medium chain acyl-CoA dehydrogenase deficiency (MCADD) to the ENBS and found a large increase in incidence (0.7 per 100,000 vs 4.3 per 100,000). ENBS and initiation of dietary modifications resulted in significant decreases in the number of acute encephalopathy episodes and a reduced proportion of intellectual disability in these patients (P <.0001).

During the study, the number of MCADD patients diagnosed prior to ENBS was 15 compared to 64 after. The diagnoses of both LCHADD and MCADD were performed using analysis of blood acylcarnitine and urinary organic acid profiles before being confirmed with genetic testing. 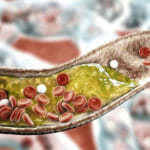