The molecular signature of cholesterol homeostasis in the central nervous system of lysosomal acid lipase (LAL)-knockout mice (Lal-/-) is similar to that of their matching Lal+/+ controls, according to a study recently published in Lipids journal. The LAL deficiency (LAL-D) disorders share the same underlying molecular pathology and are considered early-onset and late-onset versions of the same disease.

“An mRNA expression analysis for an array of genes involved in the synthesis, catabolism, storage, and transport of cholesterol in the brains of 141-day old mice did not detect any genotypic differences although the relative mRNA levels for several markers of inflammation were moderately elevated in the Lal-/-mice,” the authors of the study explained.

The study conducted by researchers from the University of Texas Southwestern Medical Center followed previous observations that untreated aging Lal-/- mice had lower brain weights than their matching Lal+/+ controls.

Moreover, Lal-/- mice had higher brain EC levels independently of age. However, this did not reflect EC in residual blood. The authors did not find any genotypic difference in brain UC levels.

LAL is involved in the intracellular processing of lipids. More precisely, it hydrolyzes ECs and triacylglycerols contained within the newly internalized lipoproteins. LAL is encoded by the gene LIPA, one of the genes involved in the regulation of cellular cholesterol homeostasis in all organs.

“In the case of LIPA, mutations that result in almost a complete loss of LAL activity cause Wolman disease (WD), a rare autosomal recessive storage disorder leading to death in infancy. Other mutations where some residual activity remains lead to cholesteryl ester storage disease (CESD), a milder, later-onset disorder,” Aqul et al explained. 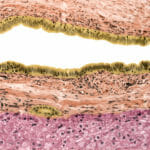