Quality-of-life (QoL) measured by the St. George’s Respiratory Questionnaire (SGRQ) could serve as a prognostic and mortality marker for patients with idiopathic pulmonary fibrosis (IPF), according to a new study published in Pulmonary Therapy.

“The PROOF registry provided valuable, real-world data on the association between baseline QoL and mortality, and longitudinal HCRU and QoL outcomes in patients with IPF over 24 months and identified that SGRQ may be an independent prognostic factor in IPF,” the authors wrote.

Another relevant finding was that almost half of the individuals required specialized care, with a total of 182 hospitalizations, and although only 66.5% were related to IPF, 33% of those patients died during the follow-up period. Almost all participants (94.2%) needed an outpatient consultation. These results emphasize the great HCRU burden on patients with IPF experience.

Even though prior publications have analyzed and reported the relationship between QoL and mortality, registries that include real-world patient populations remain limited. When comparing these to previous findings in the literature, some results are similar, while others diverge, possibly due to variabilities in the study design.

“An association between SGRQ total score and mortality has consistently been reported in all three real-world registries. Furthermore, a recent analysis of data from the IPF-PRO registry that used adjusted regression models found that worsening SGRQ total score was associated with disease severity,” the authors said. 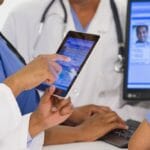