Levels of circulating cell-free double-stranded DNA (ccf-dsDNA) are high in the serum of patients with idiopathic pulmonary fibrosis (IPF) who progress rapidly, compared to those who progress slowly and healthy controls, a new study published in Thorax found.

The study also found that ccf-dsDNA is associated with amino acid, energy, and lipid metabolism pathways in patients with IPF.

These findings suggest that ccf-dsDNA can be used as a potential biomarker for the progression and severity of IPF. It could also serve as a mediator of disease progression by modulating specific metabolic pathways.

Previous research had already reported plasma levels of ccf-DNA and metabolomic changes in IPF. However, the associations between these levels and metabolic derangements in lung fibrosis were unclear.

To better understand the role of ccf-dsDNA in the pathogenesis of IPF, a team of researchers led by Soo Jung Cho, MD, of Weill Cornell Medicine examined plasma levels of ccf-dsDNA in patients with IPF and healthy controls and identified metabolites and metabolic pathways associated with these levels.

The researchers found a “notable correlation between amino acid metabolism and ccf-dsDNA, especially in the alanine/aspartate/glutamate, arginine, glutathione, and taurine/hypotaurine metabolic pathways.”

Finally, ccf-dsDNA was linked with energy metabolism pathways such as glycolysis and the tricarboxylic acid cycle.

“While no causal relationship can be determined from this observational study, further research may better elucidate the role of ccf-dsDNA and metabolic derangements both as possible biomarkers and as targets for therapeutics in IPF,” the researchers concluded. 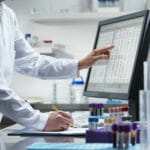