Previous studies have shown that periostin is involved in the regulation of the extracellular matrix protein and some cellular functions and its over-expression has been observed in several inflammatory and fibrotic disorders throughout the body.

Evidence has shown that periostin may play an important role in the progression of IPF, as well. A clinical trial for patients with IPF found that periostin levels could be a predictive biomarker for shortened overall survival and time to event.

“As it turns out, periostin plays a key role as a fibrotic and growth factor. Hence, it is involved in the cellular mechanisms of abnormal alveolar repair and sub-epithelial fibrosis in bronchial asthma,” the authors said.

The periostin gene (POSTN) has been shown to be upregulated in the thickened airway epithelium of patients with IPF. Another study found that mice without periostin were protected from the development of pulmonary fibrosis following injury with bleomycin. The protection was hypothesized to be from a lack of production of cytokines from the periostin-deficient fibrocytes and may also inhibit the recruitment of neutrophils and macrophages.

Other studies have shown that the fibrotic factor, transforming growth factor-beta, upregulates the POSTN gene and leads to an increase in type 1 collagen production and reduced airway distensibility. Interleukin-13 may also increase periostin expression. 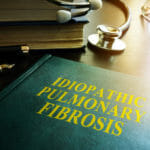