Additional data from a phase 1 clinical trial of LYT-100 (deupirfenidone) in healthy older adults showed a reduced incidence of adverse events compared to pirfenidone. The data support the initiation of the upcoming phase 2 ELEVATE trial (NCT05321420) of LYT-100 in patients with idiopathic pulmonary fibrosis (IPF).

The ELEVATE trial plans to test LYT-100 at doses that are equivalent to currently approved levels of pirfenidone in addition to higher exposure levels to see if it results in improved efficacy.

“Although approved antifibrotics for the treatment of IPF delay the progression of lung fibrosis and increase life expectancy, a large proportion of patients are unable to tolerate these treatments, leading to premature discontinuation or sub-optimal dosing,” Michael Chen, PhD, head of innovation at PureTech Health, said.

“These data further support the favorable tolerability profile of LYT-100, which has been studied in over 400 patients and healthy volunteers to date.”

The most common TEAEs experienced during the trial (>1 participant) included nausea, vomiting, headache, dizziness, and somnolence. Gastrointestinal-related adverse events were 50% lower during LYT-100 treatment than during pirfenidone (17.4% compared to 34.0%). Nervous system-related adverse events were also reduced during LYT-100 treatment (17.4% vs 31.9%).

“LYT-100 is designed to retain the pharmacological activity of pirfenidone, but has a differentiated pharmacokinetic profile which enables a lower peak systemic concentration (Cmax), while still retaining [area under curve] bioequivalence compared with the standard dosing of pirfenidone. We believe the lower Cmax we demonstrated at the 550 mg [ter in die] dose accounted for the lower incidence of adverse events we observed in the study,” Dr. Chen said.

LYT-100 is a deuterated form of pirfenidone which results in a similar area under curve pharmacokinetic profile but with a roughly 20% reduced Cmax. Besides IPF, LYT-100 is also being investigated in postacute COVID-19 respiratory complications as well as disorders of lymphatic flow and fibrotic conditions.

The phase 1 trial enrolled 49 older healthy participants aged between 60 and 79 years (mean 67.7 years), however only 44 completed treatment periods with both drugs. Half of the participants were randomly assigned to treatment sequence A and received 801 mg 3 times a day of pirfenidone for 3 days during the fed state followed by a single morning dose in the fasted state on the fourth day. After a 7-day washout period, the group then repeated the trial with LYT-100. The other half of the participants started with LYT-100 and then transitioned to pirfenidone after the 7-day washout period. 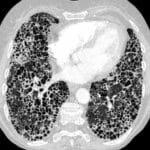