In vitro, lysophosphatidic acid (LPA) is known to promote fibrogenesis, which is dependent on LPAR1 and inhibited by BMS-986020, a first-generation orally bioavailable LPAR1 antagonist. Decato et al conducted in vivo and in vitro analyses measuring serum ECM-neoepitope biomarkers in 140 patients with IPF to enhance the understanding of the impact of LPAR1 antagonism with BMS-986020 on ECM remodeling and lung function.

LPA promotes normal wound healing and collagen deposition but, at increased levels, is also implicated in IPF pathogenesis. Pirfenidone and nintedanib are 2 known antifibrotic treatments for IPF that can slow forced vital capacity but are associated with tolerability considerations. For this reason, the blockade of LPAR1 shows promise in current clinical trials for its antifibrotic properties, particularly in lung fibrosis. A current phase 2 clinical trial using BMS-986020 demonstrated proof-of-mechanism in patients with IPF.

IPF is a progressive, debilitating lung disease characterized by epithelial damage and changes to the ECM composition, resulting in fibroblast activation and migration into the interstitium, collagen accumulation, and stiffening of the lung tissues. Consequently, this leads to lung fibrosis and fatal outcomes, with a life expectancy of 3 to 5 years after diagnosis. 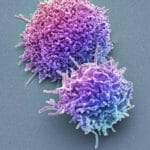