A panel of molecules identified by a team of researchers might be useful for improving the diagnosis and management of idiopathic pulmonary fibrosis (IPF).

“We have presented a unique comparative transcriptome-proteome signature of advanced IPF and identified key tissue and circulating biomarkers that could be predictive of progressive/worsening IPF,” said Sivakumar and colleagues, from Bristol-Myers Squibb Research and Development and the University of Pennsylvania.

They identified 34 differentially expressed molecules in lung specimens and plasma from patients with IPF when compared to those of healthy controls.

Comprehensive bioinformatic analysis of the differentially expressed panel showed that samples from patients with IPF were particularly enriched in elements from chemotaxis, tumor infiltration, and mast cell migration pathways. Most of them were chemokines, chemotactic factors, or proteins associated with fibrotic signaling and extracellular matrix (ECM) remodeling.

Among them, the authors emphasized the mucosal (CCL25 and CCL28) and Th2 (CCL17 and CCL22) chemokines, which were markedly upregulated in the group with IPF and were highly correlated within the patients.

In addition, the mast cell maturation chemokine CXCL12 was upregulated in the plasma of patients with IPF. Its levels were correlated to lung function and the levels of the mast cell tryptase TPSB2.

Moreover, the receptors for many of the chemokines found upregulated in patients’ plasma were overexpressed in their lungs.

The authors also found evidence for an impaired ECM degradation in IPF, including a marked decrease in the levels of markers of collagen III and VI degradation (C3M and C6M) in patients with IPF when compared to healthy controls.

“Further validation of these findings in larger cohorts will help develop a comprehensive panel of biomarkers with clinical utility to address the current unmet need in the diagnosis and management of IPF,” the authors said. Although results are promising, they require support from future dedicated studies. 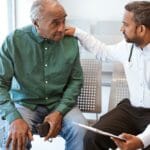