Fibroblasts/myofibroblasts induce apoptosis and affect T-cell migration in idiopathic pulmonary fibrosis (IPF), which reveals an underlying mechanism involved in the near-complete lack of T-cells in the subepithelial fibroblasts foci (FF), according to a new study published in Frontiers in Immunology. This suggests that this process is an adaptive immune response that contributes to the persistence of IPF fibroblasts in the FF and the stiffness and destruction of lung tissue that follow.

“We propose a mechanism to explain, at least partially, why the microenvironment generated by IPF fibroblasts affects the T-cell function,” the authors wrote.

“IPF fibroblasts secrete high levels of pro-apoptotic molecules such as pro-caspase 3, cytochrome C, HIF-1a, HTRA2-OMI, and TNFR1. This microenvironment activates T-cell death after a short time of exposure, despite T cells activating an anti-apoptotic profile as a defense mechanism.”

In healthy individuals, myofibroblasts are briefly detected in wound healing, but in patients with IPF, they are persistent and contribute to the accumulation of matrix and stiffness that contribute to lung destruction. IPF fibroblasts’ ability to induce T-cell apoptosis and restrict their migration at least partially explains the virtual absence of T-cells inside the FF.

The results showed that IPF fibroblasts were able to induce T-cell death quickly, as soon as 3 hours into culturing. The control fibroblasts needed up to 24 hours to reach a similar proportion of T-cell death, at which point the IPF fibroblasts began to reduce the ability of the T-cells to migrate.

The researchers expect their findings to contribute to the understanding of the underlying mechanisms involved in T-cell death and migration in IPF, which could aid in the development of new treatment strategies. 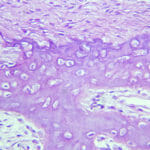 New Antifibrotic Actions Found With Pirfenidone and Nintedanib for IPF