“Doctors have suspected for some time that there are distinct subgroups or endotypes of [idiopathic pulmonary fibrosis (IPF)] that have unique functional or pathobiological disease mechanisms which make the condition even more deadly,” said Joseph Jacob, MD, lead author of a study on the tool published in EClinicalMedicine.

He added that the new tool could allow patients with IPF to be offered personalized treatments.

The aim of the researchers was to develop a way to identify scarring patterns in the lungs that may be characteristic of PPFE. In order to do so, they used CT scans obtained from 287 patients. They first asked a radiologist to identify PPFE by looking at the CT scans. The radiologist then identified 31 patients (11% of all patients) as having PPFE.

They then used their computerized image analysis tool on the scans and identified 87 cases of PPFE (30% of all cases), corresponding to a 3-fold increase compared to the radiologist’s assessment.

Treating IPF Patients in the Age of COVID-19

The researchers also retrospectively matched the IPF images of patients that had PPFE against their medical records, which showed that patients with PPFE deteriorated faster and died earlier.

They concluded that PPFE is a previously underreported disease process that can occur independently of lung fibrosis, and that increases the risk of death.

“Our computer algorithm identifies patients with the PPFE endotype of IPF which may inform patient selection in IPF drug trials and clinical management of disease,” Dr. Jacob said. He added that their algorithm “should be able to measure PPFE worsening over time in patients with IPF.”

IPF is characterized by lung fibrosis. It affects about 3 million people, aged 50 to 70 years, worldwide. Patients have a life expectancy of between 3 and 5 years, which is comparable to certain types of cancer. 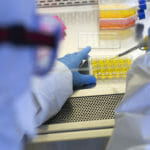