The US Food and Drug Administration (FDA) granted orphan drug designation to ifenprodil, an N-methyl-D-aspartate (NMDA) receptor antagonist that is being developed for the treatment of idiopathic pulmonary fibrosis (IPF) and chronic cough.

“We appreciate the US FDA’s decision to grant ODD [orphan drug designation] status to ifenprodil for IPF, a disease for which prognosis remains dismal, with 50% mortality expected within 3-4 years,” said Christopher J. Moreau, chief executive officer of Algernon. “This regulatory milestone comes at an important time in the development of Ifenprodil as a potential new therapy for IPF, as we plan the next steps for our clinical program.”

Algernon Pharmaceuticals has recently announced that the phase 2a trial evaluating the efficacy and safety of ifenprodil in IPF met its primary endpoint (ie, a minimum of 50% reduction in the average number of coughs per hour over 24 hours from baseline to week 12 and no worsening in forced vital capacity).

The results showed that patients receiving ifenprodil showed no worsening of their lung function, experienced improvements in the frequency of their IPF-associated cough, and reported improvements in cough severity and quality of life. Moreover, treatment with ifenprodil was safe and well-tolerated.

The study enrolled 20 participants with IPF who received 20 mg of ifenprodil 3 times a day for 12 weeks.

Ifenprodil, a novel first in class treatment for both IPF and chronic cough, is the sole active ingredient in NP-120 (originally developed by Sanofi to treat peripheral circulatory disorders). It specifically targets the NMDA-type subunit 2B, thereby preventing glutamate signaling. Many tissues express the NMDA receptor, including lung cells, T-cells, and neutrophils.

It is estimated that 70%-85% of patients with IPF suffer from a dry non-productive cough, which can often exacerbate on exertion. 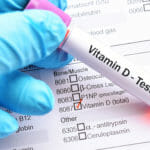 Vitamin D3 and Procalcitonin Might Be Useful Biomarkers in IPF