Hypothyroidism has a positive causal effect on idiopathic pulmonary fibrosis (IPF), according to a new study by Chinese researchers.

“These findings may have an important insight into pathogenesis and possible future therapies of IPF,” the authors wrote in the study, which appeared in EBioMedicine published by The Lancet.

Observational studies have already shown an association between hypothyroidism and IPF. However, it was not known whether there was a causal relationship between the two.

In the present study, a team of researchers led by Jiajun Zhao from the Department of Endocrinology at Shandong Provincial Hospital and Shandong University in China conducted 2-sample Mendelian randomization using a hypothyroidism genome-wide association study (GWAS) in the UK Biobank.

They found that hypothyroidism indeed had a positive causal effect on IPF. This was verified in an independent validation set and using different Mendelian randomization methods.

There was no reverse causation, and hypothyroidism had the strongest marginal evidence compared with other IPF comorbidities.

“Our study was the first attempt shedding light on the directional causal relationship between hypothyroidism and IPF, adding to existing knowledge in etiology of IPF,” the researchers wrote. “It will also facilitate revealing pathogenic pathways and planning future studies.” 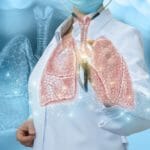