The patient was diagnosed with bilateral blurred vision, quadriparesis, binocular diplopia, hiccup, and vomiting 2 weeks before admission. MRI of the brain revealed unusual signal intensities in the bilateral hypothalamus and optic chiasma, with no lesion in the spinal cord reported.

Diagnosis of NMOSD was confirmed through the tests of serum aquaporin-4 IgG (AQP4-IgG). “Our study found a patient with prominent hypothalamic dysfunction presented typical diencephalic lesions in the initial episode, which was not observed until 2 months after she was transferred to a specialized hospital,” the authors noted.

The research team highlighted that early diagnosis may have stopped the enervating symptoms. The patient experienced multiple relapses, including the classic clinical syndromes of NMOSD and the cognitive impairment and symptoms related to psychosis. The proposed case expanded the team’s understanding of the possible pathology of NMOSD.

In this study, the research team characterized the effects of NMOSD on hypothalamic function. The patient also exhibited various behavioral abnormalities and symptoms related to psychosis. Psychotic illness was improbable with the sudden onset of her symptoms and with no history of psychiatric symptoms.

Furthermore, intravenous methylprednisolone (IVMP) and intravenous immunoglobulin (IVIg) treatment had very less effect on the first onset of dysfunction. However, plasma exchanges (PE) instantly improved her symptoms. It was noted that IVIg, IVMP, and benzodiazepine treatment, along with antipsychotic medication, improved her psychosis to a greater extent. Results of the relapse-free immunosuppression indicated that her psychosis is associated with the NMOSD flare and immune mediation.

The patient also exhibited bilateral conjugate paralysis involving upward and downward components of the vertical gaze, suggesting the involvement of the rostral interstitial nucleus of the medial longitudinal fasciculus.

Progression of NMOSD is highly variable and complex and may remain unidentified and poorly treated, the study team noted. “These findings highlight the importance of performing AQP4-IgG assay, a lumbar puncture, and MRI examination for patients with hypothalamic symptoms or atypical ophthalmoplegia to early recognize NMOSD,” the researchers concluded. 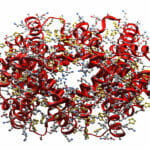