Prophylactic treatment with the extended half-life recombinant factor IX Fc fusion protein (rFIXFc) prolongs the time to first spontaneous bleeding events and reduces the frequency of first bleeding events compared to on-demand treatment in previously untreated patients with hemophilia B, according to results from the PUPs B-LONG clinical trial.

“Although these results are limited to a small patient group, they suggest that the type of treatment regimen impacts bleed pattern in pediatric [previously untreated participants],” the researchers said.

To investigate the effect of prophylaxis vs on-demand treatment with rFIXFc on spontaneous bleeding events in previously untreated patients with hemophilia B, a team of researchers led by Amy D. Shapiro, MD, conducted a post hoc analysis of the PUPs B-LONG study. The results were presented at the 63rd American Society of Hematology Annual Meeting & Exposition.

The phase 3, open-label, multicenter study recruited 33 boys with hemophilia B, aged 0 to 2 years who were not previously treated. The primary outcome measure was the percentage of participants with confirmed inhibitor development.

The median time to the first spontaneous bleeding event was 341.5 days for patients being treated with prophylaxis, compared to 183 days for those being treated on-demand.

Participants on primary prophylaxis had a lower frequency and longer time to first spontaneous bleeding events compared to participants who switched to prophylaxis from on-demand treatment.

Study to determine the safety and efficacy of rFIXFc in previously untreated males with severe hemophilia B (PUPs B-LONG). US National Library of Medicine. Last updated July 31, 2020. Accessed December 21, 2021. 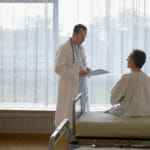 FVIII Prophylaxis Leads to Normalization of Joint Remodeling in Hemophilia A