A group of Italian physicians has released new consensus statements on the assessment and management of adults and children with hemophilia. They were published in Blood Reviews.

The statements were developed by the HAEMODOL study group through a Delphi consensus process that incorporated the expert opinions of 51 clinicians. “Ongoing monitoring and assessment of pain and its effects on QoL, with appropriate adjustment of treatment, is required for optimal pain management in PwH [people with hemophilia],” the authors wrote.

The group agreed on 7 statements regarding the assessment of pain and its effect on a patient’s quality of life. Consensus was reached that pain should be investigated as a symptom at each clinical visit, assessed using a validated quantitative scale, and integrated with bleeding episode information.

The group also agreed that it is important to differentiate acute vs chronic pain and nociceptive vs neuropathic pain. Chronic pain should also be categorized into continuous or flareups with the intensity, frequency, and duration of flareups recorded, the authors said.

For acute pain in adult patients, nonpharmacological interventions including the RICE protocol of rest, ice, compression, and elevation along with acetaminophen should be given as first-line therapy. In cases of severe pain, acetaminophen in addition to an opioid can be given. In cases where acetaminophen is ineffective or cannot be used, then a nonsteroidal anti-inflammatory drug (NSAID) in combination with a proton pump inhibitor may be used for short periods, the authors wrote.

For children with acute pain, agreement was reached that acetaminophen in addition to ice should be used as first-line treatment. Consensus was not reached regarding the use of corticosteroids or NSAIDs in children.

Chronic pain in adults should be managed with physical therapy and acetaminophen, according to the authors. For flareups, that pain should be managed with corticosteroids or NSAIDs to help reduce inflammation. Similar agreements were reached for chronic pain in children with physical therapy and acetaminophen as first-line treatment, but not for the use of corticosteroids or NSAIDs for flareups. 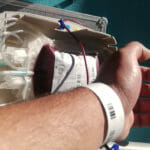