Activated prothrombin complex concentrate (aPCC) appears to be safe and highly effective as a hemostatic agent for acute bleeds due to acquired hemophilia A, according to a recently published study in the European Journal of Hematology.

Acquired hemophilia A is a rare autoimmune disease that mainly affects patients over the age of 60 years. It is associated with high mortality, reaching 38% in some studies. The high mortality is a consequence of sudden, spontaneous bleeds that can affect the gastrointestinal tract, urinary system, and nervous system.

Currently, bypassing agents such as aPCC represent the mainstay of treatment for acute bleeds in patients with acquired hemophilia A. However, there is scarce literature regarding the efficacy and safety of aPCC in a practical setting.

The authors aimed to study the efficacy and safety of aPCC through a noninterventional retrospective study including 30 patients from several Spanish hospitals. All patients had a confirmed diagnosis of acquired hemophilia A, which was corroborated with a detectable anti-factor VIII inhibitor titer of at least 0.6 BU/mL and factor VIII (%) of less than 40%, and had received aPCC to treat a bleeding episode.

Safety was measured by the presence or absence of adverse effects or death. There were 67 reported bleeds, the majority of which were spontaneous intramuscular bleeds. Gastrointestinal and genitourinary bleeds were also reported.

Approximately 50% of hemorrhages were treated with aPCC. It was used as initial therapy on 14 occasions and resolved the bleeding in 13 of them. In total, aPCC was used on 51 occasions, resolving the bleeding in 48.

“Overall, our data add to previous knowledge indicating that aPCC is effective and [safe as a] hemostatic drug as first line or second line,” the authors concluded. 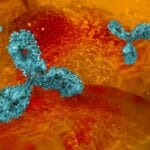 Marstacimab Demonstrates Safety and Efficacy in Hemophilia A and B