Patients with late-onset hereditary transthyretin amyloidosis (hATTR) who have a predominant p.A117S mutation tend to develop cardiomyopathy regardless of the clinical severity of polyneuropathy, according to a recently published study in Annals of Clinical and Translational Neuropathy.

Although neurologic symptoms secondary to polyneuropathy constitute the hallmark presentation of hATTR, the presence of cardiomyopathy represents the main prognostic marker. However, many authors agree that cardiomyopathy is currently underdiagnosed in patients with hATTR because several heart failure symptoms, such as dyspnea and edema, can be masked by polyneuropathy symptoms.

Fortunately, new imaging techniques, such as repurposed bone scintigraphy and cardiac magnetic resonance (CMR) imaging, have facilitated diagnosis without the need to perform a tissue biopsy and expose patients to the risks involved in the procedure.

The authors used a linear regression model to correlate cardiopathy findings with polyneuropathy findings, concluding that cardiac changes were correlated with neuropathic changes and could reflect overall severity in patients with hATTR. 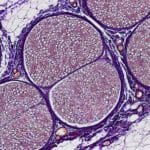