The researchers enrolled 294 patients with GISTs between 2004 and 2015 and analyzed 5- and 10-year survival rates between those receiving endoscopic therapy and those undergoing surgical resection.

The research team analyzed data from the surveillance, epidemiology, and end results database, an American population-based cancer database. They found no significant differences between the endoscopic therapy and surgical groups in terms of most baseline characteristics.

After propensity score matching, a total of 80 patients were included, 40 with endoscopic therapy and 40 undergoing surgical resection. The survival analysis revealed no significant differences between the groups in terms of 5- and 10-year overall survival (OS) or 5- and 10-year cancer-specific survival (CSS), and the prognosis of the patients in each group was similar.

The results did show that the tumors treated with endoscopic therapy were significantly smaller than those treated with surgical resection, and tumor size is a known factor related to the prognosis in GISTs. The research team’s results showed that a tumor size ≥67 mm was associated with reduced OS and CSS in these patients. 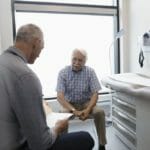