Surgical resection of imatinib-resistant tumors might lead to improved outcomes in patients with recurrent gastrointestinal stromal tumors (GIST), according to results of a case report published in the Asian Journal of Endoscopic Surgery. This supports the conclusions of related studies on GIST.

The authors reported a 78-year old patient with 2 recurrent GISTs. She underwent treatment with imatinib and 1 tumor shrank but the other recurred after 4 years, leading to a laparoscopic resection of both the imatinib-sensitive and the imatinib-resistant tumor.

“Laparoscopic surgery for small primary GISTs has become the standard treatment based on reports that showed its feasibility, safety, and with several advantages over open surgery such as less pain and invasiveness, earlier recovery, and better cosmetic results,” the authors said. “Furthermore, we previously reported the safety and feasibility of laparoscopic surgery for GISTs over 5 cm.”

Laparoscopic resection of GISTs has been controversial, given studies have found a significant risk of tumor rupture and therefore recurrence among patients with large tumors. However, there have been few studies on the laparoscopic approach to recurrent GISTs.

In this case, the researchers believed the laparoscopic approach was not only feasible but advantageous due to the specific locations and sizes of the nodules, as well as due to the less-invasive nature of laparoscopy compared with open surgery.

The patient was discharged home on day 7 post-surgery. However, imatinib administration will be continued for as long as possible given that the BFR14 trial, which studied prolonged treatment with imatinib in patients with GIST, showed that resistance can develop if the drug is suspended. Thus, the authors suggest that ongoing imatinib therapy should be mandatory in cases such as this. 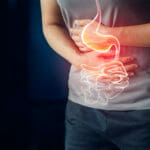 Spontaneous Hemoperitoneum Could Present as First Sign of GIST