A pair of new studies from the University of California, San Diego add to the current body of knowledge about gastrointestinal stromal tumor (GIST). Both studies, published in Clinical Cancer Research, were led by senior author Jason Sicklick, MD.

The first article, published in July 2021, suggests that the tumor’s location within the stomach may predict its mutation profile. The results of the study, based on 2418 patients’ data from the National Cancer Database and 236 patients’ data from an international cohort, showed that GISTs in the proximal stomach were almost exclusively (96%) caused by mutations in the KIT gene. In contrast, 100% of GISTs that were due to mutations in the PDGFRA or SDH genes were located in the distal stomach.

The first author of the study, Ashwyn K. Sharma, MD, noted, “In our study, we have shown that where a GIST originates from offers clues about what kind of genomic profile that tumor has, and how it may respond to the treatments we offer. We have ultimately found that the anatomic location of a tumor can be a very straightforward, cost-effective way to tailor our therapies for our patients.”

The second article, published in August 2021, described methods for establishing novel patient-derived GIST models for mutations in the SDH gene. GISTs caused by SDH mutations tend to occur in adolescents and young adults, usually metastasize, and are generally resistant to standard-of-care medications, making it important to establish models to develop new treatments.

The study also investigated the therapeutic use of the brain tumor drug temozolomide for GIST. Results showed that temozolomide treatment resulted in DNA damage and apoptosis in the patient-derived GIST cells. Temozolomide was also tested in 5 GIST patients, resulting in a 40% objective response rate and a 100% disease control rate. 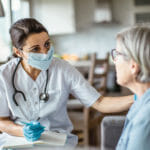