Researchers from Morocco reported the rare case of a patient with aggressive rectal gastrointestinal stromal tumor (GIST) with intestinal obstruction. The presentation was published in the journal Radiology Case Reports.

The authors suggest that cases of rectal GIST should be approached early and with great care “due to their unpredictable character of aggressiveness.” They suggest imatinib treatment in cases where the tumor cannot be resected or has metastasized to other parts of the body.

The woman was referred to palliative chemotherapy but 3 weeks after the first presentation, she developed intestinal obstruction and passed away.

GISTs are the most common growths of mesenchymal origin in the gastrointestinal tract. Rectal GIST, however, is rare, representing only around 2% of GISTs and only 0.1% of all colorectal tumors.

Even though most GISTs are benign, they can sometimes become aggressive, as in the case presented here. The mitotic power and size of the tumor are associated with the aggressive behavior of the tumor and the likelihood of metastasizing to the liver and reducing the chance of survival.

The gold-standard treatment for GISTs is radical and complete surgical resection. It usually offers patients the best chance for complete remission. However, it may not always be possible to resect the tumor, in which case treatment with a tyrosine kinase inhibitor such as imatinib may be an option. 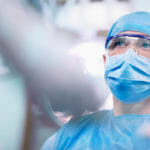