Researchers presented a case study in Molecular Genetics & Genomic Medicine describing a patient with a quadruple wild-type gastrointestinal stromal tumor (GIST) that had a novel fusion between CDC42BPB and ALK.

The study by Huang and colleagues details the case of a 33-year-old pregnant woman who visited the hospital for routine antenatal testing. A massive space-occupying lesion in the right upper abdomen was found incidentally via magnetic resonance imaging.

Computed tomography scans revealed that the mass adhered to the stomach, liver, and pancreas. Her physicians decided to remove the tumor and part of the stomach. An immunohistochemical study revealed a diagnosis of high-risk GIST.

No genetic mutations could be observed in the common locations (KIT, PDGFRA, KRAS, BRAFT, NRAS, and PIK3CA). The authors of the study wrote, “For further verification, the DNA/RNA samples were detected . . . by using the [next-generation sequencing]-based YuanSu450 gene panel, which covers all the coding exons of 450 tumor-related genes that are frequently rearranged in solid tumors.” The results labeled the tumor a quadruple wild-type GIST.

The researchers wanted to investigate the ALK status and discovered split signals for ALK in about 90% of the tumor cells, indicating the ALK gene breaking. These results ”suggested that this case was proven to be quadruple [wild-type] GIST with a novel CDC42BPB–ALK fusion, which was likely to function as the oncogenic driver in this tumor,” they wrote.

The report expanded the molecular spectrum of GIST beyond the better-known driver genes of the tumors. “These oncogenic events may have implications for therapeutic targets in patients with ALK-rearranged GIST, which deserves further investigation,” the authors concluded. 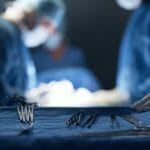