A new method using Photoshop and endoscopic ultrasound combined can help to better differentiate between gastrointestinal stromal tumors (GIST) and leiomyomas, according to new research findings.

The study was published in the Scandinavian Journal of Gastroenterology.

It is difficult to distinguish GIST from leiomyomas but essential in order to offer patients the right treatment.

Photoshop, in combination with endoscopic ultrasound, is already being used to distinguish between the 2 diseases, but the approach has limitations, the researchers noted.

A team of researchers led by Man Li, of the Second Hospital of Tianjin Medical University in Tianjin, China, explored a new method using Photoshop to identify the distinguishing features of GIST.

The team analyzed data from 472 patients who underwent endoscopic ultrasounds and were diagnosed either with GIST (n=233) or leiomyoma (n=239). Using Photoshop, the researchers calculated the mean gray value of the tumor, muscularis propria, submucosa, and water from the same image. They then calculated the ratio of the mean gray value of tumor to muscularis propria, submucosa, and water.

The area under the curve of the mean gray value of the tumor was 0.952, which can better distinguish GIST from leiomyomas with a sensitivity of 0.9 and specificity of 0.975.

The area under the curve for the ratios of the mean gray value of tumor to muscularis propria, submucosa, and water was 0.917, 0.897, and 0.929, respectively.

The researchers then verified these data in clinical cases of known results in 40 GIST and 40 leiomyoma cases. The sensitivity of the mean gray value of the tumor, and the ratios of the mean gray value of tumor to muscularis propria, submucosa, and water for the diagnosis of leiomyomas were 97.5%, 82.5%, 95%, and 97.5%, respectively. For GIST, they were 62.5%, 95%, 80%, and 92.5%, respectively.

They concluded that applying the gray value ratios has great discrimination significance for the 2 diseases. It can also eliminate any differences caused by instruments and users. 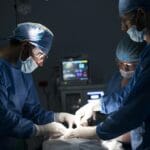