This retrospective study reviewed results from 2355 patients from the Surveillance, Epidemiology, and End Results (SEER) database who had been diagnosed with GISTs between 2010 and 2015; 1999 (84.9%) received surgical resection and 356 (15.1%) received endoscopic resection. The median overall survival (mOS) and the 5-year overall survival (OS) rate of the endoscopic group were 73.5 months and 85.7%, respectively, while the surgical group had an mOS of 72.2 months and a 5-year OS rate of 81.5%.

The median cancer-specific survival (CSS) and the 5-year CSS rate of the endoscopic therapy group were higher than the surgical group, with 81.3 months and 97.1% vs 78.8 months and 92.7%.

It should be noted that endoscopic treatment of GISTs does have some limitations, including intraoperative complications, difficulty performing resections of GISTs with unfavorable anatomic locations, and risk of positive margins due to reduced ability to recognize tumor boundaries. However, advantages of endoscopic resection include lower operating time, length of hospital stay, mean total cost, and no significant difference in recurrence and complication rate between the endoscopic and surgical groups, as reported by a  multicenter study published in 2017.

In addition, previous studies showed that endoscopic resection of small GISTs results in less trauma, preservation of integrity and organ function, and no significant difference in long-term recurrence compared with surgical resection.

“Endoscopic resection of primary tumors may be an appealing option for patients who cannot tolerate surgery and are suitable for endoscopic treatment,” the study authors wrote. The results of this study will need to be verified by a prospective multicenter collaborative study, they added. 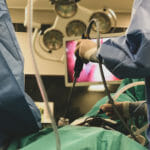