With the possibility of DMD being added to the Recommended Uniform Screening Panel (RUSP), it is important to define the role of NBS in the screening and diagnosis of female carriers of DMD mutations, the authors noted. The article described 2 algorithms for the identification of female carriers based on either a female infant with elevated levels of the muscle isoform of creatine kinase (CK-MM) or carriers identified through cascade genetic testing.

“As females are at risk of developing dystrophinopathies, NBS for DMD/BMD should be made available to all infants,” the authors said.

Based on experiences during the New York State pilot study to investigate the use of NBS for the detection of NBS, the authors recommend female patients with elevated CK-MM levels be tested again later to confirm elevated levels. Afterward, genetic testing should be performed to identify possible pathogenic DMD gene variants or a broader set of variants from other neuromuscular diseases, the researchers noted.

If a child is identified with DMD/BMD, whether boy or girl, the mother should be tested to identify her carrier status. If she is confirmed to carry a pathogenic variant, other family members should also be tested, the investigators noted.

“A better understanding of the natural history in female carriers will support future evidence-based clinical management. Identification of female carriers has the secondary benefit of identifying other affected males or carrier females in the family,” the authors continued.

Since DMD is an X-linked disorder, all males who inherit a pathogenic or likely pathogenic mutation are expected to be affected, but less is known about the impact on heterozygotic female carriers.

Estimates for female carriers affected by symptoms of dystrophinopathy range in the literature from 2.5% to more than 20% and they may experience neuromuscular and cardiac manifestations. These carriers may experience a history of weakness and clumsiness, myalgia, unexplained abdominal or chest pain, tachycardia of unknown origin, or pseudohypertrophy of calf muscles. 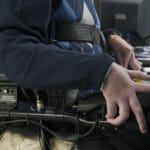 DMD May Be Associated With Language Development Abnormalities