Prophylactic treatments containing high-dose intravenous methotrexate are better than those consisting of intrathecal methotrexate or no prophylaxis at all in preventing the central nervous system (CNS) relapse of diffuse large B-cell lymphoma (DLBCL) in intermediate-to-high-risk patients. This is according to a new study by Chinese researchers published in the journal International Immunopharmacology.

Intrathecal and high-dose intravenous methotrexate are both recommended as prophylaxis to prevent the central nervous system relapse of DLBCL, Nianhai Zhang, of the Fujian Medical University, in Fuzhou, China, and colleagues reported.

The researchers set out to identify the best prophylaxis strategy. In doing so, they conducted a meta-analysis of the literature to compare the efficacy of the 2 prophylactic approaches and no prophylaxis in intermediate- to high-risk patients with DLBCL.

The team analyzed 12 studies involving a total of 5950 patients with DLBCL.

Looking ahead, larger studies are needed to confirm these findings, the authors concluded. 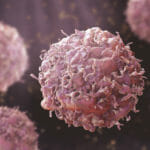 Select Cytokines May Be Linked With Poor Prognosis in DLBCL