Triplet chemotherapy using nab-paclitaxel plus gemcitabine-cisplatin (Gem/Cis/nab-P) triplet has demonstrated an acceptable safety profile and a significant down-staging effect in patients with cholangiocarcinoma, according to a recent study published in Surgery.

Cholangiocarcinoma is one of the most dangerous and fatal diseases, the study authors noted. Recently, new triple chemotherapy has received a lot of attention for treating patients with highly advanced cholangiocarcinoma, the researchers added.

Clinical trial performance of Gem/Cis/nab-P has revealed an average progression-free and overall survival of 11.8 and 19.2 months, respectively. The objective response rate (ORR) and the disease control rate (DCR) were 45% and 84%, respectively.

The investigators set out to assess the clinical feasibility of the new triplet chemotherapy in locally advanced cholangiocarcinoma. They evaluated 129 patients who were diagnosed with the disease and treated with Gem/Cis/nab-P between October 2019 and August 2021 at the CHA University in Seongnam, Korea.

Results of the study revealed that the ORR and DCR were 60.8% and 91.9%, respectively, among the patients with a measurable tumor. Moreover, after the triplet chemotherapy, 77 patients (59.7%) were determined resectable, while 73 (56.6%) underwent subsequent curative surgery. The study also found a major postsurgery complication rate of 15.1%, with two postoperative deaths (2.7%) and six complete remission cases (8.2%) in the final pathology.

Notably, there was no lymph node metastasis in the 52 patients (71.2%). In addition, significantly higher 12-month overall survival (95.9% vs. 76.8%) was found in patients who had undergone surgery after their triplet chemotherapy compared to those treated with just chemotherapy. The reported ORR and DCR in this study were 60.8% and 91.9%, respectively.

The systemic recurrence achieved in this study was more common than the local recurrence, indicating the importance of systemic control with potent chemotherapy. The study findings suggest that triplet systemic chemotherapy could be a viable option for induction therapy in patients suffering from locally advanced cholangiocarcinoma.

The authors reported some limitations in their study, including the absence of a global standard definition for the resectability of cholangiocarcinoma and the short-term prognosis of the suggested strategy of surgery after induction chemotherapy.

“In conclusion, this study showed that triplet chemotherapy using Gem/Cis/nab-P had an acceptable safety profile and a clear down-staging effect through a high response rate in patients with cholangiocarcinoma whose prognosis is normally expected to be very poor,” the authors concluded. 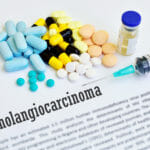 Multiresistant Organisms May Lead to Poor Outcomes in CCA