The effects seemed to be partly mediated by the wingless-related integration site (Wnt) signaling. Mechanistically, the researchers showed that PDT decreased the expression of Wnt-7b, β-catenin, c-Myc, and cyclin D1 while increasing the expression of axin-2 in 2 perihilar cholangiocarcinoma cell lines.

In addition, they showed that PDT enhanced the expression of the tumor suppressor protein p53 and the microRNA (miR) miR-34a-5p. The treatment of p53-knockdown cells with PDT inhibited cell apoptosis.

“As recently reported, p53 seems to exert a substantial effect on cell apoptosis due to porphyrin-mediated PDT via the direct interaction between p53 and drug, leading to its accumulation and induction of p53-dependent apoptosis away from light and under irradiation,” the researchers wrote.

By using specific tools to upregulate and downregulate the expression of miR-34a-5p, the researchers found that it also targeted Wnt-7b directly, and miR-34a-5p-mediated inhibition of Wnt-7b was dependent on protein argonaute-2.

The treatment of Wnt-7b-knockdown cells with PDT had opposite effects to those observed upon miR-34a-5p knockdown and was able to attenuate the impact of miR-34a-5p inhibition.

PDT takes advantage of the selective aggregation properties of photosensitizers to kill tumor cells. The PDT protocol selected for this study used 5-aminolevulinic acid, a photosensitizing precursor that has been applied to photodynamic diagnosis and PDT. 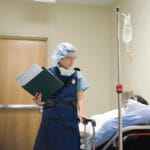