The effects of NF-kappa B interacting IncRNA (NKILA) involved in the tumorigenesis and progression of cholangiocarcinoma (CCA) were studied and published in Liver International.

This experimental study led by Zheng obtained both tumoral and nontumoral tissue samples from 84 patients with CCA that had previously undergone surgery. First, they observed an overall increased activity of NKILA in CCA compared to noncancerous cells.

This finding allowed them to determine an association between the amount of overexpression of NKILA and a higher score in the tumor, node, and metastasis scale. This marker was also correlated with lymph node infiltration and distant metastasis, hence, also associating with a poorer prognosis.

Coherently, analyses in vitro and in vivo showed NKILA facilitated tumor growth and metastasis in CCA, and later experiments revealed a possible mechanism that involves micro RNAs and gene modifications.

“We found that NKILA promoted CCA proliferation and metastasis both in vitro and in vivo,” the authors said. “Increased expression of NKILA adsorbed miR-582-3p in a [N6-methyladenosine]-dependent manner, consequently leading to the upregulation of YAP1 expression and CCA progression.”

The exact role of NKILA in human cell homeostasis is still not completely defined. Higher levels are seen in other neoplastic diseases such as lung cancer and gliomas and further correlate with a poor prognosis. Regardless, NKILA could serve as a tumor suppressor in other cancers such as breast, bone, and hepatocellular.

“Taken together, our findings indicate a novel regulatory mechanism of NKILA for promoting CCA progression and that NKILA may be a promising target for CCA treatment,” the authors concluded. 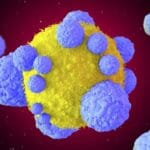