Researchers have discovered that surgical resection with negative margins increases long-term survival in cholangiocarcinoma (CCA )patients, according to a study published in The American Surgeon. They also discovered that the presenting size of the tumor and pathological stage play a significant role in predicting survival rates post-surgery, highlighting the importance of early diagnosis and surgical treatment (if appropriate) to achieve positive outcomes.

Surgical resection remains the only cure for all forms of cholangiocarcinoma (intrahepatic, perihilar, and distal). Methods include liver resection, orthotopic liver transplantation, and pancreatoduodenectomy.

The purpose of this study was to identify factors that may improve the long-term survival of CCA patients. Researchers looked into the demographic, intervention-oriented, and tumor-related variables in order to identify their effects on 3 key areas:

This study was conducted based on patient survival and disease recurrence datasets obtained from electronic records at the Mayo Clinic in Jacksonville, Florida, between 1995 to 2016. According to the cancer registry, all recruited patients had a follow-up once a year. CCA patients were classified according to the anatomical site of the disease (intrahepatic, hilar/perihilar, distal). A total of 170 patients were included in the study, with the mean age being 61.3±13.7 years.

The anatomical locations of surgery were:

As expected, the study found that low pathological stage and negative resection margins were associated with better outcomes, such as higher survival rates and lower recurrence. The overall survival rates of this study were:

This study confirms that among the most important prognostic indicators for this disease are the stage of the disease and the margin status when surgery is performed. The researchers conclude the study by stating, “maintaining a negative margin with a low complication operation can result in a higher 5-year survival rate without recurrence.” 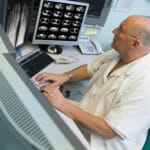