Prevention and treatment of neutrophilic inflammation and respiratory exacerbations in young children with cystic fibrosis (CF) may reduce the decline in lung function as they grow older, according to a new study published in the Journal of Cystic Fibrosis.

The researchers evaluated 119 children with CF from Australia at the age of 5 years to determine which factors predicted lung decline during the period of childhood to adolescence.

“If the progressive loss of lung function that begins to accelerate during late adolescence is to be prevented, a better understanding of factors associated with, or initiating, this decline is required,” the researchers wrote. “Multiple factors have been implicated in progressive lung disease in CF, and a shift from a reactive treatment strategy to one that advocates preventing loss of lung function has been proposed.”

In Australia, 50%-70% of children diagnosed with CF already have mild bronchiectasis at the start of schooling, and the researchers aimed to determine modifiable factors that might lead to a preventive treatment strategy for these patients. To this end, they analyzed data from the CF-FAB project, which was carried out between 2013 and 2017 and is a follow-up to the Australasian Cystic Fibrosis Bronchoalveolar Lavage study carried out previously.

The analysis revealed that early life exacerbations, hospitalizations for respiratory exacerbations, levels of neutrophilic inflammation, and infection, particularly by Aspergillus, were all factors that predicted how quickly lung function would decline between childhood and adolescence in children with CF.

The researchers mentioned that the power of the presence of Aspergillus in bronchoalveolar lavage fluid to predict lung function decline was surprising, given that it is a common finding that is typically ignored. The authors propose further research into whether Aspergillus is a cause of such deterioration or is a marker of decline. In addition, specific interventions in early life that are aimed at the various factors discovered should be a priority in future studies. 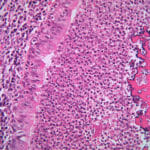