Mucus composition and nonswellable mucus flakes could serve as markers of airway inflammation and infection in patients with cystic fibrosis (CF), according to a new study published in the Journal of Cystic Fibrosis.

A key finding was that both mucin and DNA concentrations increased from preschoolers to school-aged children, while healthy individuals had the lowest values. Interestingly, mucin levels further rose before pulmonary function diminished in preschoolers. Similarly, mucus flakes were more abundant among the patients with CF when compared to healthy participants.

Knowing that DNA correlates with neutrophil accumulation, the authors hypothesized that these immunological cells may be the ones responsible for the increased concentrations of DNA in infected lungs. DNA, in turn, creates a “sticky” surface that promotes airway surface liquid aggregation and worsens the clinical picture.

Another important result revealed that mucus flakes of the CF groups had higher mucin 5A (MUC5AC) and lower mucin 5B (MUC5B)/MUC5AC ratio vs predominant MUC5B in the control group.

“A disease-specific mechanism for flake formation related to CF mucus hyperconcentration and inflammation is consistent with observed biochemical differences between CF and healthy flakes,” the authors said. “The relative decrease in MUC5B/MUC5AC ratios present in CF BALF is consistent with other muco-inflammatory diseases and CF cell culture models. This observation may also indicate that the ratio of MUC5B/MUC5AC in BALF is useful as a biomarker of mucus pathology in CF.”

Previous publications also aimed to assess disease severity by determining other characteristics of the BALF, such as osmotic pressure and mucus rheology, and while yielding important information, no useful markers or therapeutic targets have yet been identified.

Given these study results, although further research should be conducted, existent drugs that dissolve mucus flakes remain rational and effective therapeutic schemes for CF and other obstructive diseases with increased production or decreased clearance of bronchial secretions.

“These findings indicate that mucin and DNA concentration, mucus flakes, and the MUC5B/MUC5AC ratio, may serve as biomarkers of CF disease status and may have utility in evaluating modulator therapies,” the authors concluded. 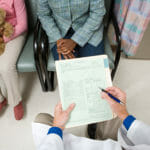