Researchers reported a very rare case of cold autoimmune hemolytic anemia (AIHA) with myelodysplastic syndromes (MDS), as published in the Indian Journal of Pathology and Microbiology.

“An increased awareness of secondary AIHA associated with MDS may help in prompt action that can be taken for earlier recognition of autoimmune phenomena potentially, leading to more positive outcomes for patients,” Deepti Mutreja and the coauthors of the study wrote.

The case is that of a male patient aged 76 years who presented to the Armed Forces Medical College Pune in Maharashtra, India with bilateral pedal edema, progressive dyspnea, and a fever. He had a history of hypertension and type 2 diabetes.

He had also been diagnosed with megaloblastic anemia for which he was being treated with vitamin B12 with no response. Blood tests revealed that he had red cell agglutination and thrombocytopenia.

“This report is being discussed in view of its rarity of presentation of cold AIHA with MDS,” the researchers wrote and added that more research is needed to investigate the occurrence of autoimmune phenomena in MDS.

MDS is the name given to a group of diseases characterized by clonal hematopoietic stem cell neoplasms due to bone marrow failure. This leads to ineffective hematopoiesis, dyspoiesis, and cytopenias and can progress to acute leukemia. 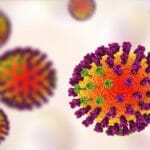 CAD May Be Underlying Initial Signs in Inborn Errors of Immunity