An extrahepatic progenitor cell pool can contribute to liver repair in Alagille syndrome (ALGS) based on a zebrafish model of the disease, according to the results of a new study published in Hepatology.

“The liver’s reputation for regeneration and repair has outdone itself – now with an outside source for repair,” Emma R. Andersson, PhD, from the Department of Cell and Molecular Biology at Karolinska Institute in Solna, Sweden wrote in an editorial article published in the same issue.

ALGS is a rare disease characterized by cholestasis caused by developmental defects in peripheral bile ducts in the liver due to a mutation disrupting the Notch signaling pathway. Cholestasis alleviates by itself in some patients. This is thought to be the result of de novo bile duct generation.

The zebrafish study has shown that intrahepatic duct cells can regenerate from multipotent progenitors originating from an Fgf-dependent extrahepatic stem cell niche when the Notch signaling pathway is resumed.

Therefore, the authors suggested that extrahepatic duct progenitor cells can contribute to liver regeneration in a Notch and Fgf-dependent manner and that increasing the Notch signaling pathway could increase the regeneration of intrahepatic duct cells in patients with ALGS.

The results of the zebrafish study suggest that there may be an alternative mechanism to what has been shown previously where it was suggested that TGF-beta driven hepatocyte transdifferentiation into cholangiocytes establishes the peripheral bile ducts in the de novo grown biliary tree, Dr. Andersson said.

In the zebrafish study, no hepatocyte transdifferentiation was present. This suggests that both extrahepatic duct cells and hepatocytes can contribute to the de novo regeneration of bile ducts.

Determining which cell sources are most relevant and which mechanisms are more active in patients with ALGS can help researchers develop new therapies for this disease. 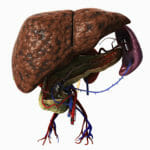