The authors identified 84 SERPINA1 variants (21 synonymous, 62 missense, and 1 loss-of-function) in 28,794 individuals from the Malm diet and cancer cohort. The number of incident VTE events that occurred among individuals without prevalent VTE was 2584.

Additionally, the authors combined rare qualifying variants (total prevalence in the population, 0.6%) with the Z variant. The resulting analysis showed that carrying 2 alleles, either ZZ genotype or compound heterozygotes (Z plus any other variant, n=5) had increased VTE risk. In contrast, carrying 1 allele did not increase VTE risk.

In addition to the Z variant, the variant rs141620200 was the only one showing different minor allele frequencies between individuals with and without VTE, showing an increase of ~0.4% in VTE individuals compared to controls. The adjusted hazard ratio for combinations of the Z variant and rare qualifying variants was 4.5 (95% CI, 2.0-10.0). 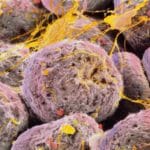