According to a new study published in the International Journal of Molecular Sciences, fibrinopeptide AαVal541 may serve as a biochemical footprint that can help assess the activity of alpha-1-antitrypsin (AAT) augmentation therapy in patients with AAT deficiency.

AAT is the most important antiprotease in the lungs, and AAT deficiency results in an impaired inhibition of neutrophil elastase (NE) and proteinase 3 (PR3) that leads to the destruction of alveoli, the hallmark of emphysema. Previous research has shown that serum levels of AAT correlate with the severity of emphysema.

Biomarkers or footprints of AAT activity may help evaluate the effect of AAT augmentation therapy and determine whether the current recommended dose of 60 mg/kg is sufficient.

Here, a team of researchers led by Jan Stolk, MD investigated the levels of fibrinopeptide AαVal541 over 1 month following a single dose of AAT augmentation therapy (240 mg/kg) in 10 patients with severe AAT deficiency.

They found that the median AαVal541 plasma level was 140.2 nM before treatment. Following AAT augmentation therapy, the levels decreased to 20.6 nM and 26.2 nM in patients receiving the treatment for the first time and those who had previously received infusions, respectively.

In 9 of the 10 patients, the levels of AαVal541 decreased to the median level of healthy controls. One to 2 weeks after treatment, AαVal541 levels started to increase in all patients.

The researchers concluded that fibrinopeptide AαVal541 may serve as a biochemical footprint to assess the efficacy of the inhibition of PR3 activity in patients with AAT deficiency receiving augmentation therapy.

They stated, “This direct reflection of the effect of AAT augmentation therapy opens opportunities for personalized and tailored AAT dosing, which might support a potential beneficial effect on pulmonary function over the long term.” 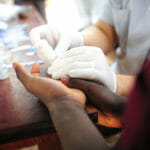