A series of 3 case studies suggest a possible link between lung cancer, chronic obstructive pulmonary disease (COPD), and alpha-1 antitrypsin deficiency (AATD), as published in Social Science Research Network. All 3 patients had COPD and developed lung cancer but were found to have normal serum alpha-1 antitrypsin (AAT) levels despite being heterozygous for AATD.

“The present study has reported three cases with normal serum AAT levels with heterozygous alleles, suggesting they may be overlooked if not tested. We infer that unmeasurable lung damage is more prevalent in heterozygous patients and we believe that sharing our results may draw more attention in this regard,” the authors said.

“Screening all COPD patients once for AATD is recommended by World Health Organization (WHO).”

Previous studies have suggested that AATD may increase the risk of many different types of cancer including lung cancer, the researchers said. One study referenced an increased lung risk of 70%-100%. COPD is another risk factor for lung cancer and AATD can cause early-onset COPD, manifesting with emphysema and chronic bronchitis.

All 3 cases involved male patients with COPD and a history of smoking. The first, an 81-year-old, had a 50 mm diameter mass in the lower right lobe and a 15 mm nodule in the right upper lobe. Biopsy revealed squamous cell carcinoma (SCC) and genetic testing yielded a heterozygous M/Plowell AATD mutation. The patient died of respiratory failure in the second month after diagnosis.

The second case was a 45-year-old male patient who was also diagnosed with stage 3B SCC following the discovery of a centrally located very dense hypermetabolic mass. Genetic analysis revealed that he had a heterozygous M/I mutation. The patient received chemotherapy but died after a year of follow-up.

Case number 3 was a 64-year-old who was also diagnosed with stage 3B SCC and was heterozygous for the M/Plowell mutation. The patient denied chemotherapy and passed away 9 months after diagnosis. 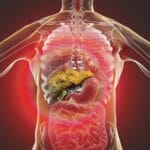