A female patient with alpha-1 antitrypsin deficiency (AATD) was able to have a successful pregnancy and give birth to a healthy baby once receiving augmentation therapy, as published in Pulmonology.

The case report supports the initiation and use of augmentation therapy through intravenous injections of alpha-1 antitrypsin (AAT) during pregnancy. The patient began augmentation therapy at 18 weeks of pregnancy after her AAT levels had dropped from 74 mg/dL at 6 months prepregnancy to 38 mg/dL at 18 weeks. At 26 weeks of pregnancy and continued therapy, her AAT levels had increased to 108 mg/dL.

“This case adds to the very limited data regarding AAT therapy during pregnancy, supporting the argument that it can be safely initiated in response to severe impairment of respiratory function,” the authors said.

The patient was initially diagnosed with AATD at age 21 years after a lack of response to treatment for severe asthma. She became pregnant at 29 years of age and had not initiated augmentation therapy prior to pregnancy. A moderate exacerbation of symptoms was experienced by the patient at weeks 17 and 18.

At week 18 the patient’s forced expiratory volume in the 1st second (FEV1) had decreased by 0.25 L compared to week 9 values, and because of the drop in FEV1 and AAT levels, the patient began augmentation therapy at week 18 at a dose of 60 mg/kg/week to maintain a blood threshold of 80 mg/dL.

“The case adds to the evidence that it is possible for patients with AATD to experience no pregnancy-related complications and deliver a healthy baby; however, close patient monitoring is essential to a positive outcome,” the authors concluded. 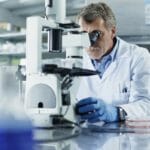