Spinal muscular atrophy (SMA) is a disorder characterized by muscle atrophy and weakness. It is inherited in an autosomal recessive manner and is caused by mutations/deletions in the SMN1 gene, which ensures adequate levels of survival motor neuron proteins in the body.

“The incidence of scoliosis, one of the different orthopedic disorders associated with the disease, is between 50% and 70%,” Davies and colleagues wrote in Spine Deformity.

Scoliosis among patients with SMA can often coincide with chest wall deformities; combined, these conditions hasten the pace of pulmonary function deterioration.

Given that a straight line can often be drawn between scoliosis and respiratory insufficiency, physicians are starting to treat scoliosis aggressively in the hopes that further morbidity can be delayed.

“Improvements in spinal/chest wall implant systems, perioperative critical care management, and the promising results of medical therapies such as intrathecal nusinersen, have helped encourage this enthusiasm,” Alhammoud and colleagues wrote in Spine Deformity.

The Role of Imaging Studies

Prior to any decision on surgical intervention, surgeons often want to have comprehensive information regarding any other interspinal anomalies present in patients with scoliosis associated with SMA.

Davies and colleagues conducted a study to determine if presurgical magnetic resonance imaging (MRI) can achieve this end. They analyzed the clinical data of 214 patients with SMA and scoliosis/kyphoscoliosis > 50o in the coronal plane; 56 among them required surgery to correct their spinal deformity. The patients recruited had an MRI of the whole spine and posterior fossa as part of their preoperative assessment.

“The images were analyzed for associated intraspinal lesions, such as chiari, syringomyelia, hydromyelia, tethered cord, tumors, and cysts, by at least one spine surgeon and an imaging specialist,” the research team wrote.

The results of this study revealed that intraspinal lesions were only detected in 1.78% of patients, which is a much lower figure than what was previously reported in other studies, which place the figure between 6.3% and 35%.

The question therefore remains whether the use of spinal MRI as part of a preoperative assessment is necessary, given its costs, risks, and potential complications.

“Considering our results and in addition to the above-mentioned aspects related to the study, owing to its high cost, the MRI places a significant financial burden on the healthcare system,” Davies and colleagues wrote.

While this study suggests that preoperative MRI does not yield useful new information most of the time, it is difficult to imagine a scenario in which surgeons would not request for one prior to any spinal surgery. Surgeons would understandably prefer to have as much information as possible prior to the initiation of any surgical intervention.

On the issue of controversial investigations and interventions, it should be noted that there is current debate on whether scoliosis surgery is always the right approach in patients with SMA. This is because patients with SMA tend to be frailer than the general population, meaning that any major surgery carries a much higher risk of complications.

Alhammoud and colleagues conducted a systematic review studying the impact of scoliosis surgery on pulmonary function in patients with SMA. They reviewed existing medical literature that contains keywords relating to scoliosis surgery and SMA.

The types of complications reported were chest-related (such as atelectasis and pneumonia), spine-related (implant failure and curve progression), and surgical site infection.

This literature review suggests that the impact of scoliosis correction is variable at best, and clinically insignificant at worst. Taken together with the study on preoperative imaging by Davies and colleagues, one gets the sense that none of the evidence regarding investigations and interventions regarding scoliosis in patients with SMA lean strongly in favor of scoliosis correction.

So what is the alternative? It should be stressed that the decision for scoliosis correction should be made on an individual basis, based on the best judgement of the attending surgeon. However, the next best alternative to promote quality of life and extend survival in patients with SMA is the timely initiation of nusinersen, which has overwhelmingly improved the lives of users. In addition, early evidence on gene therapies suggest great promise.

We have every reason to believe that continued research into the efficacy of scoliosis surgery will further clarify its role in improving pulmonary function in patients with SMA.

“In the meantime, practitioners should temper their expectations with respect to the reliability of pulmonary function improvement post scoliosis surgery, and counsel their patients accordingly regarding the current state of the literature,” Alhammoud and colleagues wrote. 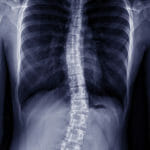