Medullary thyroid carcinoma (MTC) represents only 1% to 2% of thyroid carcinomas, making it an exceedingly rare disease. We know it is a malignancy arising from parafollicular thyroid C cells. A key diagnostic tool, aside from fine-needle aspiration, is ultrasound. Ultrasound is the most important preoperative diagnostic tool and can be used by skilled physicians to approximate the cancer stage and its corresponding prognosis.

What makes ultrasound so useful? Mainly, it allows for the identification of key features of the tumor, such as its shape, margin, composition, echogenicity, and vascularity, as well as the presence or absence of calcification. These features largely correspond to its biological features, meaning that physicians can infer a lot about the disease even before surgical exploration.

However, misdiagnoses from ultrasound can occur. The difficulty arises when malignant features are not readily observed in an ultrasound scan, causing physicians to misdiagnose the thyroid tumor or only arrive at a correct diagnosis at a later follow-up scan.

Researchers from Tianjin Medical University Cancer Institute and Hospital in China recently investigated the ultrasound and clinical features of MTC and published their findings in Endocrine. They recruited 189 patients treated at their institution between 2010 to 2015 and used ultrasound to categorize their MTC as either “indeterminate” (i-MTC) or “malignant” (m-MTC). The categorization was made according to the Thyroid Imaging, Reporting and Data System (TI-RADS) published by America College of Radiology, a widely used scoring system based on ultrasound features that is helpful at predicting the probability of thyroid malignancy.

A total of 29 patients were categorized as i-MTC and 160 as m-MTC. Researchers then compared the ultrasound findings and clinical features between the 2 groups. It is their findings in these areas that we will explore in detail.

The mean age of diagnosis was 49.8 years and 48.6 years in i-MTC and m-MTC patients respectively. In both cancers, the frequency was slightly higher in females than in males.

Close similarities were also observed between the two tumor types. Total thyroidectomy was more commonly performed in both i-MTC and m-MTC, compared to unilateral lobectomy. When complete thyroid tumor excision was needed, both i-MTC and m-MTC patients tended to have complete surgery performed. The mean tumor size in i-MTC was 1.93 and 2.04 in m-MTC. i-MTC and m-MTC also shared similar tumor multifocality. Distant metastasis tended to be absent in both groups.

First of all, the wealth of information that ultrasound scans can provide should not be underestimated, and physicians should not see them as merely a triage tool for a preliminary diagnosis to be made. Instead, a close study of the various features that can be revealed through an ultrasound scan should encourage physicians to leave no stone unturned when performing the procedure.

With regards to this specific study, researchers confirmed what we knew about MTC, in that it typically has a late presentation, with more than half of MTC cases only diagnosed at advanced stages of the disease.

At present, an ultrasound scan combined with fine-needle aspiration represents the best combination of preoperative diagnostic tools at our disposal. It would be wise for physicians to utilize both tools with the greatest care and skill to approach the operating room with as much information as possible. 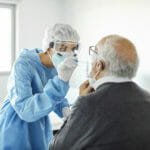 The Impact of Age on Sporadic MTC Prognosis