Cancer metastases to different locations of the body often result in additional complications that need to be managed symptomatically. In this article, we will be reviewing and discussing a rare case presentation: a patient who had metastatic medullary thyroid carcinoma (MTC) presenting as Cushing’s syndrome.

Forde and colleagues shared the case of a 41-year-old man who presented with back and hip pain for the past 6 months. Three years prior, he had lumbar spine fusion surgery. Clinical examination demonstrated a body mass index (BMI) in the obese range, slightly raised blood pressure, and central obesity with blue abdominal striae. Baseline laboratory investigations were normal.

The physicians proceeded to look for the source of ectopic ACTH secretion. A positron emission tomography (PET) scan demonstrated mildly hypermetabolic lymph nodes on the right side of the neck with no distal disease detected. A scan revealed tracer uptake in the nodes of the right neck.

Serum calcitonin was elevated significantly at 45,264 ng/L. The patient then underwent a total thyroidectomy and left neck dissection. Histology results confirmed a 7 mm MTC and a 3.5 mm papillary thyroid carcinoma. The patient was started on vandetanib therapy, which elicited a positive clinical response.

In a published article about Cushing’s syndrome, Barbot and colleagues wrote about its classical features:

Endocrinologists today are better equipped to screen for hypercortisolism even without the presence of these clinical features (since many of them can be present in the general population, especially with the rise of obesity as a pandemic). “As [a] general rule, patients with unusual features for their age such as osteoporosis, hypertension, uncontrolled diabetes mellitus and patients with adrenal nodules represent a high risk population that should be considered for hypercortisolism screening,” Barbot et al wrote.

MTC is a rare form of thyroid cancer, accounting for only 5% to 8% of all thyroid carcinomas. The ectopic secretion of ACTH by MTC is not a common occurrence.

“Clinical outbreak of ectopic ACTH production is a rare event in MTC,” Barbosa and colleagues wrote. ”The diagnosis is established based on hypercortisolism with normal to high levels of plasma ACTH and elevated lipotropic pituitary hormone (LPH), not suppressed by high doses of dexamethasone, absence of pituitary adenoma, and the parallel evolution, whether remission or worsening, of ACTH-dependent Cushing’s syndrome and MTC.”

In this case study, the patient failed the DST. A CRF test was then performed, which did not demonstrate a dose-dependent increase in ACTH or cortisol after CRF injection. Forde and colleagues wrote, “For this patient, the CRF test was used, which has comparable diagnostic accuracy to the high dose dexamethasone suppression test in differentiating between pituitary and ectopic sources of ACTH secretion.”

MTC with paraneoplastic Cushing’s syndrome carries a poor prognosis: only one-fifth of patients survive for more than 1 year after diagnosis. The American Thyroid Association recommends symptomatic treatment for patients with this diagnosis, which usually entails anti-adrenal medications and surgical debunking. The control of ectopic ACTH secretion is clinically relevant because studies indicate that about half of patients die from complications arising from secondary hypercortisolism.

Forde et al concluded their case study by highlighting the challenge of diagnosing and treating MTC with paraneoplastic Cushing’s syndrome: “MTC-related Cushing’s syndrome is a rare complication of this aggressive tumor and presents significant diagnostic and management challenges for clinicians and patients, respectively. Symptoms and signs of hypercortisolism may precede the diagnosis of MTC and multiple agents may be required to achieve disease control.” 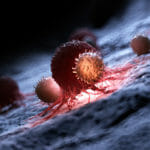