Despite the efforts, the scientific community still faces the mirage of early MTC diagnosis. Family history and genetic testing are prime starting steps in MTC diagnostic process. “With 20% of MTC arising from an autosomal dominant disorder, identifying at-risk family members before the development of overt malignancy is an obvious target for definitive prevention and cure for MTC,” Leimbach and colleagues explain in a review article published in Oncology. Nearly all inherited cases arise from a germline mutation of the RET proto-oncogene.

Hereditary MTC cases mainly occur in the setting of multiple endocrine neoplasia (MEN), which presents as two types, MEN2A and MEN2B. Almost all (95%) patients with MEN2A develop medullary thyroid cancer at some point in their life. MEN2A is typically detected in the third decade of life and arises as a de novo mutation in 5%-9% of cases. On the other hand, MEN2B usually develops during infancy, with 75% occurring as de novo germline mutation with early metastasis.

RET mutation is also observed in half of the patients with sporadic MTC. In addition, 18%-80% of sporadic MTC patients have mutations in HRAS, KRAS, or NRAS. Sporadic MTC is usually less aggressive than hereditary MTC. These tumors have a low growth rate, are well differentiated, and tend to be locally confined.

The diagnosis of MTC is usually established after the analysis of a fine needle biopsy aspiration (FNA) biopsy of a thyroid nodule. When there is suspicion of MTC, blood testing is performed to measure the levels of calcitonin and carcinoembryonic antigen (CEA), which are are sensitive tumor markers and are typically elevated. However, these markers have some important limitations that might compromise MTC diagnosis.

Serum calcitonin levels are generally proportional to tumor involvement. However, their measurement presents some limitations. “One limitation of serum Ctn [calcitonin] measurement is that there are large population variations; in 3–10% of normal subjects, the serum Ctn is higher than the typical reference range of 10 pg/mL,” Leimbach et al explain. For instance, males, infants, and individuals with increased BMI, chronic kidney disease, or smoking habits, have higher baselines.

There are also methodological limitations, including high-degree of variability and interfering conditions with the assay, as well as antibodies-related features. As such, when serum calcitonin levels are lower than expected, it should raise suspicion for technical constraints.

Moreover, Gambardella et al also stress the need for considering calcitonin-negative MTC when approaching diagnosis. “Calcitonin negative MTC is an extremely rare pathology. The diagnosis and the surveillance [are] often challenging and delayed, due to the lack of elevation of serum markers as calcitonin and [carcinoembryonic] antigen.”

CEA elevation in MTC patients is suggestive of early dedifferentiation. Hence, serum CEA levels are measured in addition to calcitonin levels during the surveillance of an MTC patient. On the other hand, the use of CEA as a screening test is compromised by its low specificity.

“The utility of CEA may be in its ability to assist in cancer staging. In a retrospective analysis of 33 patients with MTC, CEA levels greater than 162 ng/mL had contralateral lymph node metastasis, >271 ng/mL were associated
with tumor size greater than 37 mm, increased cancer stage for >377 ng/mL, and distant metastasis >405 ng/mL,” Leimbach et al explain.

Currently, the American Thyroid Associate recommends the concurrent measurement of serum calcitonin and CEA at baseline and at least every six months to determine doubling time.

Liquid Biopsy in MTC: A Tool to Consider?

Patients subjected to MTC resection presented calcitonin-positive CTCs up to twelve years after initial diagnosis. In addition, researchers found high CTC levels in three MTC patients with low serum calcitonin levels. Despite their results are in need of further validation in larger cohorts, they suggest an association between high CTC levels and poorer prognosis. The detection and counting of MTC patient-derived CTCs can be performed with the approved EpCAM-based CellSerch technology. Also, it can predict overall survival and risk of mortality in patients with advanced MTC. Patients with metastatic MTC and with five or more CTCs seem to have poorer survival.

cf-DNA levels may be particularly promising in calcitonin- and RET-negative MTC cases, since their levels were shown to be inversely correlated. Moreover, the identification of the RET-M918T variation in MTC-derived cf-DNA was more accurate in predicting outcomes than calcitonin doubling time and was associated with poorer overall survival.

There is also evidence for the association between RET mutations in MTC-derived cf-DNA and response to therapy. For instance, RET-V804M mutation attenuated during treatment with selpercatinib (LOXO-292, LY3527723) and reappeared together with RET-G810 mutation when disease started to progress. “As the detection of these mutations has been linked with [selpercatinib] resistance, ct-DNA monitoring may facilitate the early identification of unresponsive patients who need alternative therapies,” Romano et al said.

The levels of circulating miRNAs have prognostic value in MTC. For example, MTC patients have increased levels of miRNA-222-3p and miRNA-17-5p, which were able to distinguish MTC patients from those with benign nodules. Researchers found 51 miRNAs that were differentially expressed between locally advanced and metastatic MTC patients. From this analysis, they highlighted miRNA-375, whose levels were particularly elevated in active disease in comparison to unaffected or cured disease. High levels of miRNA-375 were associated with distant metastasis and reduced overall survival. The levels of miRNA-144 and miRNA-34a were also found to be higher in MTC patients, especially those with RET mutation, when compared to healthy controls.

According to Romano et al, “the role of cf-DNA as a marker of tumor diagnosis, prognosis and response to treatment has been reported in MTC. For example, Ctn [calcitonin] serum levels and the presence of RET mutation inversely correlated with cf-DNA amount in 58 MTC patients.”

Taking together, liquid biopsy is a promising tool to add diagnostic and prognostic value to the current MTC assessment practice. 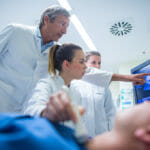 The Value of Ultrasound in Medullary Thyroid Carcinoma Management