Rare diseases with a genetic basis “provide an invaluable opportunity to learn about novel molecular mechanisms regulating bone turnover,” Helderman and colleagues wrote in Bone. “Such conditions have led to the identification of critical proteins/signaling pathways involved in maintaining bone health.”

Lysosomal acid lipase deficiency (LAL-D), which belongs to a group of diseases collectively known as lysosomal storage diseases, is one such example.

Wolman disease is characterized as having a more severe phenotype than cholesteryl ester storage disease. In Wolman disease, clinical signs may include steatorrhea, hepatosplenomegaly, and adrenal calcification. Without medical intervention, patients typically die within a year.

The primary clinical signs of cholesteryl ester storage disease are hypercholesterolemia and premature atherosclerosis, brought about by the accumulation of triacylglycerols in the small intestine, liver, and adrenal glands.

Notably absent from these symptom lists is any mention of skeletal disease. According to Helderman and colleagues, no documented skeletal phenotype has yet been associated with LAL-D. This is because bone pathology is often thought to be caused by dyslipidemia, as high cholesterol and premature atherosclerosis are associated with poor bone health.

A Closer Look at Bone Pathology

The researchers also discovered that LAL plays a primary role in osteoblastogenesis and the maintenance of osteoblast function. LAL protein was found to be expressed in osteoblasts and the femoral cortex. Calvariae osteoblasts from LAL knockout mice demonstrated impaired differentiation potential, they found.

The team conducted in vitro studies on the role of LAL in osteoblasts by using lalistat, a selective LAL inhibitor. They found that inhibiting LAL in bone marrow stem cells achieves the recapitulation of the impaired osteoblast phenotype observed in LAL knockout calvariae osteoblasts.

Another finding from their study was that inhibiting LAL in osteoblasts can alter lipid metabolism throughout differentiation. The researchers were able to capture unique lipid features in 4 groups: control day 0, lalistat day 0, control day 7, and lalistat day 7. They discovered that the most pronounced amount of lipid accumulation was a result of osteoblast differentiation, while the most pronounced decrease in lipid accumulation was in the lalistat groups.

“The current study establishes, for the first time, that LAL is essential for skeletal health as it supports osteoblast differentiation in a cell-autonomous manner via modulation of lipid metabolism,” they concluded.

Gaucher disease is another lysosomal storage disease that has been studied for its bone pathology. Like LAL-D, Gaucher disease leads to the abnormal accumulation of lipids in the body. In Gaucher disease, Gaucher cells replace Kupffer cells in the liver and alveolar macrophages in the lung. They also infiltrate the bone marrow. This causes significant metabolic derangements.

Unlike in the case of LAL-D, bone disease is characterized as a prominent symptom in patients with Gaucher disease. Gaucher disease causes abnormalities in the modeling and remodeling of bones, leading to osteopenia/osteoporosis. In more severe cases, it can lead to osteonecrosis.

“Skeletal manifestations are prevalent at all ages and are the principal cause of pain, disability, and reduced quality of life,” Hughes and colleagues wrote in the Journal of Bone and Mineral Research.

Histopathological studies reveal the presence of osteolytic lesions, fibrosis, necrosis, and trabecular bone loss in patients with Gaucher disease. Current therapies can modify some aspects of bone disease, such as bone marrow infiltration by abnormal macrophages. However, some changes in patients with Gaucher disease are not reversible, such as bone disease complications (ie, osteonecrosis) and manifestations of chronic bone disease (ie, osteoarthritis).

However, similar to LAL-D, there are no recommended guidelines for the evaluation and management of bone pathology in Gaucher disease. In addition, physicians may not be entirely familiar with the complexity of bone pathology in patients with lysosomal storage disorders. Skeletal manifestations also change and worsen over time, requiring close monitoring to maximize care.

“There is a need to enhance awareness and to improve diagnosis, characterization, quantification, and treatment of skeletal and [bone marrow] pathology in patients with [Gaucher disease],” Hughes and colleagues wrote.

As for LAL-D, research conducted by Helderman et al and others continues to shed light on the vital role that LAL plays in maintaining bone health. Research into the relationship between LAL-D and bone health allows us to appreciate more fully the effects of dyslipidemia and cholesterol homeostasis on the skeletal system. By taking bone health seriously, physicians have yet another opportunity to improve the quality of life of patients with lysosomal storage diseases. 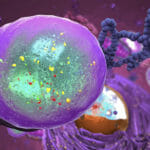 Evolving Perspectives on the Role of Lysosomes in Maintaining Cellular Homeostasis