Idiopathic pulmonary fibrosis (IPF) and lung cancer are often viewed as 2 separate diseases, each with its own pathophysiology. However, recent studies have suggested they are more alike than previously acknowledged.

Lung cancer is one of the leading causes of cancer-related deaths across the globe, and patients with IPF are at a higher risk of developing it. If lung cancer develops in a patient with IPF, the risk of morbidity is as high as 50% or more. Almost certainly, their survival rate decreases.

As published in the European Journal of Cell Biology, Wang and Yang conducted a literature review to investigate any possible links between IPF and lung cancer. Before we delve into their discoveries, let’s take a closer look at the epidemiological and clinical characteristics of lung cancer.

The Disparate Impact of Lung Cancer

The prevalence of lung cancer is growing around the world; however, disparities remain between demographic distributions. Scientists have noted that a country’s stage of development correlates with the prevalence of lung cancer in it. A possible explanation for this is that cancer statistics in developing countries are less reliable; however, it may be that individuals in developing countries smoke more than their counterparts in more developed countries.

In Clinics in Chest Medicine, Bade and colleagues wrote, “Up to 80% of current smokers now live in low- or middle- income countries, and more than one-half of lung cancer deaths occur in less developed regions.”

However, increasing public health campaigns encouraging smoking cessation has had an impact on countries that implement them. These campaigns tend to be run in richer countries, such as Singapore, the United Kingdom, and the United States.

Unsurprisingly, the risk of lung cancer is exponentially greater in individuals who are cigarette smokers. In this regard, the health advice for cigarette smokers has not changed despite decades of research: stop smoking as soon as possible, and get professional help if necessary.

“The effects of cigarette smoking outweigh all other factors that lead to lung cancer,” Bade and colleagues wrote. “To this day, there is no question that tobacco smoking remains the most important modifiable risk factor for lung cancer with about 90% of lung cancers arising owing to tobacco use.”

Various theories on why this is the case have been proposed, including biomass burning, occupational exposure to asbestos, and environmental air pollution. In addition, scientists are increasingly studying the effects of chronic lung diseases on the odds of developing lung cancer.

We now return to the literature review conducted by Wang and Yang on the possible links between IPF and lung cancer. Their study highlighted a few crucial ways IPF can give rise to lung cancer.

Studies have demonstrated that abnormal mechanical forces generated in IPF, such as stiffness and stretching, can drive pathological processes in lung cancer. This theory suggests that extracellular stiffness originating from IPF can activate the proliferation of local cancerous cells. In addition, this concentrated growth factor microenvironment can awaken dormant cancer cells.

Mechanical stimulation can also induce a number of functional changes in vascular endothelial cells. Another hallmark of cancer, in addition to the ability of cancer cells to migrate, is abnormal angiogenesis in cancer cells. The abnormal development of blood vessels in cancer cells can supply cancer tissues with the nutrients and oxygen they need to survive.

Mechanical cues, such as cyclic stretching and tissue stiffness, can impact abnormal angiogenesis in cancer tissues. Stiffness in the extracellular matrix can promote angiogenic sprouts and promote deeper invasion distances.

“The two overlapping characteristics of these two diseases are coincidentally related to mechanical forces (tissue stiffness and mechanical stretch),” Wang and Yang wrote. “We highlight the vital effects of mechanical forces generated in IPF on the initiation and progression of lung cancer from the perspective of the hallmarks of cancer.” 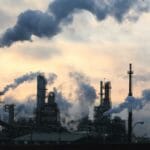 The Relationship Between Air Pollution and Idiopathic Pulmonary Fibrosis