One of the latest shifts in how we practice medicine is the recognition that some of our more pressing problems can be answered through innovations and discoveries in scientific research. It is often at reputable medical conferences that an exchange of ideas between medical disciplines occurs, ideas that make one ponder how today’s advancements are shaping the medicine of tomorrow.

Before medicine became a highly specialized field, a doctor was expected to have a general knowledge of all systems in the body and every common ailment known to man. This “jack of all trades” approach to medicine soon lost momentum, as clinicians realized that better outcomes could be achieved if one commits to a particular specialty and work with other doctors on that basis.

In a recent article in the journal Blood, Herzog and colleagues raised a theory that proposes that disorders of coagulation are caused by autoantibody formation in gene-encoding coagulation factors.

There have been various proposals on how diseases of coagulation, such as hemophilia, arise. However, much of the medical world is content with knowing it is an inherited disorder and is more interested in finding a long-term cure.

Herzog and colleagues proposed that there unmistakably is an immunological component to inherited coagulation disorders.

“Formation of anti-drug antibodies represents a major complication in the treatment of inherited coagulation diseases, while autoantibodies may also cause coagulation disorders,” Herzog et al wrote. “These humoral immune responses can result in a life-threatening risk of excessive bleeding, thus prompting advances in clinical immunotherapy for patients with bleeding disorders.”

The current mainstay treatment for hemophilia A is factor VIII replacement therapy, and it has largely controlled symptoms of bleeding. However, the dreaded problem of inhibitor formation rears its ugly head from time to time. When inhibitors are detected, the risk for morbidity and mortality among patients with hemophilia A rises exponentially.

Immunosuppression therapy has also been investigated as a means to eradicate inhibitors, mostly in patients with poor prognoses. However, data for its efficacy in eradicating inhibitors are mixed as best.

“[Immunosuppression therapy] bears risks of infection, and nonfactor therapies may not be universally applicable and may bear thrombotic risk,” Herzog and colleagues wrote. “These concerns sparked the development of a plethora of preclinical studies to explore alternative approaches, taking advantage of advances in immunotherapy, improved understanding of immune regulation, and novel technologies for effective drug and antigen delivery.”

In Support of Immune Suppression

Some scientists propose that it is precisely the mechanisms of immune suppression that induce tolerance toward factor VIII, reducing the T and B cells that act against it.

For example, rapamycin is an antibiotic known for its ability to inhibit the mammalian target of rapamycin. This results in reduced cell cycle progression and the suppression of effector T cell proliferation. The end result is that this molecule becomes an immune suppressor for allograft transplantation.

Studies on this drug on hemophilia A mice demonstrated that rapamycin can prevent inhibition formation, even with weekly factor VIII infusion, over 3.5 months. For hemophilia A mice not treated with rapamycin, titer inhibitor formation could be observed.

This means that, at least in mice studies, rapamycin can help prevent the development of inhibitors in hemophilia A factor VIII replacement therapy.

Another interesting observation made by scientists was that concurrent treatment with dexamethasone and corticosteroids in conjunction with factor VIII replacement significantly reduced the number of factor VIII antibodies in hemophilia A mice.

“Suppression of pro-inflammatory signals during initial exposures to [factor VIII] has been shown to reduce the incidence of inhibitor development in a number of studies,” Merlin and Follenzi wrote in Frontiers in Immunology.

Studies also demonstrate that combining rapamycin and IgG2a anti-CD20 reduced the inhibitors from a high titer to a low titer (from around 10 BU/ml to ≤5 BU/ml). However, scientists observed a slight increase in inhibitor titers after FVIII was rechallenged following B cell repopulation.

Just how close are we to finding a way to stop inhibitor development in hemophilia A completely? As demonstrated in this article, immunosuppression therapy may play a role, but that needs to be clarified in further studies.

“There is a need for new strategies aiming to induce a definitive tolerance to [factor VIII],” Merlin and Follenzi concluded. 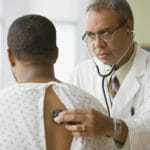