Patients with hereditary transthyretin amyloidosis (hATTR) may develop ocular manifestations secondary to circulating transthyretin (TTR) or due to the local production of mutant TTR. Ocular involvement usually occurs later in the course of the disease and can be observed even after a liver transplant. In fact, some studies suggest that liver transplantation can even accelerate ocular deterioration.

The production of TTR in the eye is mainly supported by retinal pigment epithelial cells, though amyloid deposits have been identified in several ocular tissues, including the corneal endothelium, lens capsule, iris epithelium, vitreous body, conjunctiva, lacrimal glands, among others. The molecular mechanisms underlying amyloid fibrillogenesis in intraocular tissues might be different from those in extraocular tissues as the amyloid fibrils observed in the retina and in extraocular muscles exhibit biochemical differences.

Hence, a complete ophthalmological examination is of utmost importance to detect ocular involvement, even if subclinical, in hATTR patients.

“Amyloid deposition in the vitreous, with floaters and a consequent progressive decrease in visual acuity, is almost pathognomonic of hereditary amyloidosis by TTR gene mutation, occurring either during the natural course of the disease or after hepatic transplantation: the greater the density of vitreous amyloid deposition, the higher the degree of visual loss, up to only light perception,” explained Angelo Maria Minnella et al in a review article published in Genes.

The incidence of vitreous opacities in hATTR varies from 5.4% to 35%, being more common and developing earlier in patients with Arg34Gly, Tyr114Cys, Thr49Ala, and Glu54Lys mutations than in those with Val30Met mutations. Indirect signs of vitreous amyloidosis (eg, pseudopodia lentis, vitreous with glass wool appearance, and perivascular amyloid deposits in the retina) may be observed in asymptomatic patients.

In some cases, vitreous amyloidosis may be the initial sign of hATTR. Hence, it is important to assess for possible subclinical systemic manifestations of the disease in such patients.

Vitreous opacities are treated with 25-gauge pars plana vitrectomy, which aims to restore vision and prevent relapses. However, relapse may occur even several years after the procedure due to dispersion of residual vitreous deposits or ongoing intraocular production of mutated TTR.

The release of amyloid TTR into the aqueous humor is the main cause of glaucoma in hATTR patients. Early diagnosis of COAG is essential since it is the leading cause of irreversible blindness in these patients.

The increase in intraocular pressure (IOP) caused by amyloid deposition in certain ocular tissues may develop months or years before glaucoma. Hence, long-term monitoring and follow-up of IOP in hATTR patients are important.

In contrast to glaucomatous patients, hATTR patients with COAG do not have increased levels of erythropoietin. Therefore, these patients require a more aggressive hypotonic treatment to preserve vision, as neuroprotective substances seem to be ineffective.

Hemorrhages and cotton wool spots, which are visible signs of CRVCs, are observed in about 20% of patients with hATTR, being particularly prevalent in those with the Tyr114Cys mutation. The most severe complication of retinal amyloid angiopathy is neovascularization, which, ultimately, can lead to blindness.

Minnella et al suggest a possible association between vitreous amyloidosis and retinal angiopathy. “The appearance and rapid progression of amyloidotic retinal angiopathy after vitreous amyloidosis removal (personal unpublished data) suggest that amyloid impregnation of the small terminal vessels in the peripheral retina moves from the vitreous to the vessel lumen and may cause progressive changes to the vessel wall with subsequent obliteration,” they wrote.

Amyloid deposition at the inner pupillary margin originates peculiar pupillary indentations that are characteristic of ocular amyloidosis. Anisocoria and pupillary light-near dissociation may also be observed in some patients. Early detection of pupillary changes is essential, as they may precede the insidious onset of glaucoma by about 2 years.

The occurrence of optic neuropathy in hATTR patients is rare but should be suspected in cases of unexplained progressive visual loss after ruling out vitreous opacity and optic nerve damage due to glaucoma.

Amyloid deposition can also be detected in tissues surrounding the eye, such as ocular adnexa, extraocular muscles, levator palpebrae muscle, eyelids, and the lacrimal system. Manifestations in such structures are rare and probably underdiagnosed since symptoms are vague.

An analysis of 9 autopsied eyes from hATTR patients with the Val30Met mutation revealed that most amyloid (85.7%) was localized in extraocular muscles, followed by 44.4% in the sclera. Amyloid fibrils were also detected in orbital adipose tissue.

The authors hypothesized that these alterations “may be related to a malfunction of TTR protein leading to a perturbation of visual cycle resulting in a reduced supply of retinoids, for both rod and cone photoreceptors.”

Moreover, they found that patients with a confirmed diagnosis of primary hATTR with no visual impairment might exhibit alterations in retinal function, even if structural retinal damage is absent or minimal, together with corneal nerve abnormalities.

“Sub-epithelial nervous plexus alterations and thinning of stromal nerves, as well as ERG abnormalities might be used as specific early biomarkers for peripheral denervation, both in patients with overt disease and in carriers,” they concluded. 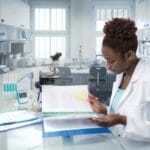