Lymph node metastasis is one of the most significant prognostic indicators post-surgery. However, detecting lymph node metastasis has its challenges, and physicians often have to make a decision on the appropriateness of lymphadenectomy with limited information.

Italian researchers conducted a literature review of the indications for lymphadenectomy and its prognostic implications and published their findings in the European Journal of Surgical Oncology. Their literature review will form the basis for the discussions in this article.

Ideally, a decision on the appropriateness of lymphadenectomy should be made when there is conclusive evidence on whether lymph node metastasis is present or not; alas, we do not possess such tools. What we do have, however, are some imaging modalities and prediction models that can assess the likelihood of metastasis occurring.

Assessing lymph node size during preoperative imaging has been proposed as a way of determining the likelihood of lymph node metastasis, but some studies dispute the usefulness of this technique. For example, one study reported that CT findings of round lymph nodes larger than 16 mm have adequate positive-predictive value (PPV), but in reality, only 2.7% of resected lymph nodes meet this criterion. This has been confirmed by MRI studies: the PPV of lymph node metastasis based on size is a mere 48.0%. In addition, lymph nodes under 8 mm in size are not visible with diffusion MRI.

18FDG-PET was highlighted in a recent review as highly predictive of nodal involvement, with calls to incorporate it into current staging protocols. However, there is still much we do not know about the usefulness of this imaging modality: while a study placed its accuracy of detecting lymph node metastasis at an impressive 81.8%, its use seems to be limited to lymph nodes larger than 1 cm. However, there is general consensus that it is still better than MRI and CT in predicting the presence of lymph node metastasis.

In view of the limitations of medical imaging, researchers have turned to factors that strongly correlate with lymph node metastasis to predict its presence, such as Ca19.9 levels. A study proposed that Ca19.9 levels above 100 U/ml were associated with regional lymph node involvement, while levels above 200 U/ml were predictive of para-aortic nodal disease. However, this was a small study, and the accuracy of using Ca19.9 alone as a tumor marker to predict nodal involvement is believed to be low.

Another proposal is to use a combination of independent risk factors to better predict the odds of lymph node metastasis. A study by Chen et al identified 3 such factors:

As we all know, lymph node metastasis is an absolute contraindication to liver transplantation. This means that physicians need to use all methods available to rule it out in the event that liver transplantation is under consideration for unresectable intrahepatic cholangiocarcinoma.

Numerous studies have looked into the survival benefits of lymphadenectomy. A few retrospective studies which reported no lymph node disease (LND) or pN0 after lymphadenectomy showed 5-year overall survival (OS) between 15% and 17%, as well as 5-year disease-free survival (DFS) between 11.4% and 38.6%.

Studies investigating the results of lymphadenectomy in intrahepatic cholangiocarcinoma associated with hepatitis B reported OS between 22 months and 35.9 months, and a 5-year DFS between 21.7% to 33.4%. However, a limitation of these studies is that “comparisons between patients who did and did not receive LND were often unmatched, and patients who received LND were those with a higher probability of being node-positive and therefore of having a poorer prognosis,” explained the authors of the literature review.

The Need for Further Research 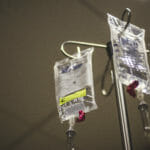