Modern medicine allows us to access information on virtually every disease in the world from our cellular devices. On one hand, this is a brilliant development: it lets physicians keep up to date about the latest protocols and treatments available for a particular disease; on the other hand, too much information can cloud good judgment.

Today, physicians are expected to recognize common, treatable conditions without provoking unnecessary alarm; they are also expected to spot rare diseases and investigate them thoroughly. Both can coexist, albeit not easily. One requires the recognition of commonly described patterns; the other, the recognition of unusual and suspicious deviations from normality.

In a sentence: medicine is difficult. However, we should not give up hope on developing the twin skills of recognizing the common and the uncommon for the sake of our patients.

In this article, we will be summarizing a case report presented by Schindler et al. They wrote, “Our case report and literature review suggest that Alagille syndrome‐causing variants could confer risk for developing HCC regardless of phenotypic severity and highlight a need for a cancer screening protocol that would enable early detection and treatment in this at‐risk population.”

In other words, Alagille syndrome, already an extremely rare disease, may yet lead to hepatocellular carcinoma (HCC), another rare disease. Let’s take a look at the case report as presented.

A 58-year-old woman with a history of Alagille syndrome presented with a persistent productive cough, reflux disease, and weight loss. She was referred for a chest x-ray and an abdominal ultrasound. With regards to her Alagille syndrome, she had mild clinical features, with no history of hepatic complications.

Schindler et al wrote, “An abdominal ultrasound revealed a large heterogeneous hypervascular mass in the right lobe of the liver measuring 10.8 × 12.9 × 11.8 cm as well as mild bilateral renal cortical atrophy.” MRI with contrast performed after 4 months revealed that the mass has grown to measurements of 14.3 × 10.9 × 14.2 cm. Because the mass occupied most of the right hepatic lobe, her physicians were suspicious of HCC (initially they thought the mass was a cavernous hemangioma).

The patient had no known risk factors for HCC, such as hepatitis B infection, hepatitis C infection, or alcoholism.

“At the time of the MRI, the proband presented with elevated gamma‐glutamyltransferase as well as abnormal levels of albumin, direct bilirubin, alkaline phosphatase, aspartate aminotransferase (AST), and alanine aminotransferase (ALT),” Schindler and colleagues wrote. The MRI scan was consistent with hepatocellular carcinoma. The size of the tumor meant that liver transplantation was not a therapeutic option.

The patient refused chemotherapy or any therapeutic interventions of any kind. A second MRI revealed that the cancer has grown to 15.6 x 11.3 x 16.6 cm and exerted a stable mass effect on the right kidney.

Schindler et al concluded, “Five months after the second MRI, the proband presented to the emergency department with acute kidney injury, hyperkalemia, and ascites. She was transitioned to home palliative care the following day and died 5 months later at the age of 59, 15 months following diagnosis.”

Does Alagille syndrome predispose a patient to developing HCC, and if so, what biologically possible mechanisms may be at play? Initially, some scientists proposed that HCC develops as a result of cholestasis. Schindler et al has a different theory; they wrote, “Our observation of HCC in two mildly‐affected patients (ie, without overt liver involvement) points to a possible disease association, with the argument that ALGS‐causing germline variants could predispose affected individuals to HCC by interfering with Notch signaling.”

Studies have described how dysfunction in Notch signaling can be observed in a number of different cancers. Schindler and colleagues wrote, “In vitro studies using HCC cell lines suggest that Notch activation promotes HCC development based on the observation of an upregulation in progenitor cell differentiation, which has led some to propose Notch inhibition as a cancer therapy.”

This theory is supported by Zhu et al; in their study on Notch signaling and HCC, they wrote, “In mice, Notch activation promotes loss of hepatocyte identity and simultaneously enhances stromal cell activity, and in the inflammatory and fibrotic tissue environment of non-alcoholic steatohepatitis (NASH), is sufficient to induce HCC.”

Schindler and colleagues said “future sequencing studies should focus on uncovering possible molecular etiologies of HCC among individuals with ALGS in order to help affected individuals understand their risk and guide the clinical management of ALGS.” 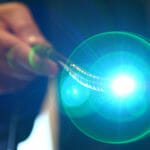 The Role Endoscopy Plays in the Diagnosis and Treatment of Cholangiocarcinoma