There are a few things that physicians do their best to avoid when a patient is under their care. One of the most basic things to check, for example, is the patient’s allergy status to avoid needless drug reactions that can sometimes be life-threatening. Another thing that is always on a physician’s mind is the prevention of thromboembolic events (TEs), particularly during long hospital stays. The risk of TEs varies according to illness, but measures such as the use of deep vein thrombosis (DVT) compression stockings are routinely prescribed as a precautionary measure.

TEs often happen out of the blue, and physicians ignore their risk of occurrence at their own peril. TEs, after all, can kill faster than the primary disease being treated by the physician. Therefore, it is incredibly important to understand the risk of TEs that any one disease carries.

A group of American researchers conducted a study to evaluate the risk of TEs in patients with cold agglutinin disease (CAD), a form of autoimmune hemolytic anemia (AIHA), and published their findings in Research and Practice in Thrombosis and Haemostasis. “Cold agglutinin disease,” the researchers explained, “is a rare form of complement-mediated AIHA in which the pathophysiology is driven by [immunoglobulin (Ig)] M autoantibodies binding to red blood cells (RBCs) at or just below core body temperature, depending on the thermal amplitude of the IgM.”

Let’s take a look at their study and examine their results.

To ensure that the patients did indeed have CAD, a random sample of 100 records was taken to allow hematologists to perform a manual review of “snippets” of patient notes to assess their CAD statuses. This procedure recorded an agreement rate of 95%, and the researchers thus set the mention of CAD terms at 3 separate dates as sufficient for a “true” diagnosis of CAD.

In this study, patients with CAD were matched with patients without a CAD diagnosis but who had similar characteristics in terms of sex, age, race, comorbidities, and region of residence.

TEs were identified according to the criteria set by the International Classification of Diseases (ICD). “TEs were defined as the patient’s first inpatient or outpatient medical claim for a TE, regardless of type (venous, arterial, and cerebral),” the researchers of this study explained. Examples of TEs included myocardial infarction, DVT, pulmonary embolism, and cerebral infarction.

Risk of Thromboembolic Events in CAD

Below were the key findings of the study:

It is clear from this study that having CAD increases one’s risk of having TEs. What biologically plausible mechanism could explain this finding? One theory is that a prothrombic state is created in CAD due to the interaction between hemolysis and the coagulation cascade, resulting in a decrease in nitric oxide levels and leading to vasoconstriction and platelet aggregation. Berentsen et al wrote, ” Hemolysis in CAD and cold agglutinin syndrome (CAS) is mediated by the classical complement pathway and is predominantly extravascular.” The authors of the current study stated, “Other theories invoke enhanced tissue factor expression on endothelial cells and the presence of complement-induced tissue factor-expressing microparticles.”

This study is the largest cohort study of CAD patients to date. It is also the first study to demonstrate a clear association between CAD and a significantly increased risk of TEs.

Now that a clear association between CAD and TEs has been established, what can be done to reduce the risk of TEs in our CAD patients? Scientists have commended the benefit of complement inhibition – studies have shown that it decreases complement-mediated hemolysis and decreases TEs by 93%. The authors of the study opined, “Therapeutic mechanisms that could effectively control complement-mediated hemolysis in patients with CAD may help decrease their risk of TEs and should be investigated.”

The risk of TEs in patients with CAD should be treated with the care and gravity it deserves. The authors of this study concluded, “the results presented provide a new insight into potential complications in a rare disease in which the ability to conduct prospective trials with sufficient numbers of patients is challenging.” Medical attention should now turn towards safely reducing the risk of TEs with respect to the unique challenges presented by CAD. 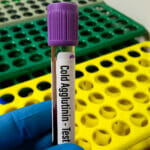